This article shows in-depth details about the Secure Copy Protocol, how to use it, the command syntax, and a few examples. In a nutshell, the SCP command is used as a secure and straightforward way to transfer files from computers via the SSH service.

What is SCP (Secure Copy Protocol)?

The Secure Copy Protocol or “SCP” helps to transfer computer files securely from a local to a remote host. It is somewhat similar to the File Transfer Protocol “FTP”, but it adds security and authentication.

The SCP runs on Port 22, and some people say that it’s a combination of the BSD RCP and the SSH protocol.

The RCP is used to transfer the files, and the SSH protocol provides authentication and encryption, so SCP can be considered a mixture of these two protocols.

The data that is being transferred remains confidential, so the SCP can be used to successfully block packet sniffers that can extract valuable information from the data packets.

The SCP can also benefit from using SSH because it allows the inclusion of permissions and timestamps for the file that needs to be uploaded.

How to use SCP?

The SCP client can upload files to the SSH server or request files and directories for downloading.

The server, in return, sends all the subdirectories and the files that are available for download. Note that, the server controls the file downloads so there can be security risks if the client is unintentionally connected to a malicious server.

SCP is a native command in most Operating Systems, such as MacOS, Windows, or Linux.

You can find it just by entering the “scp” command on the terminal line. But you can also find it in common network file transfer applications, such as PuTTy (ExtraPuTTy). 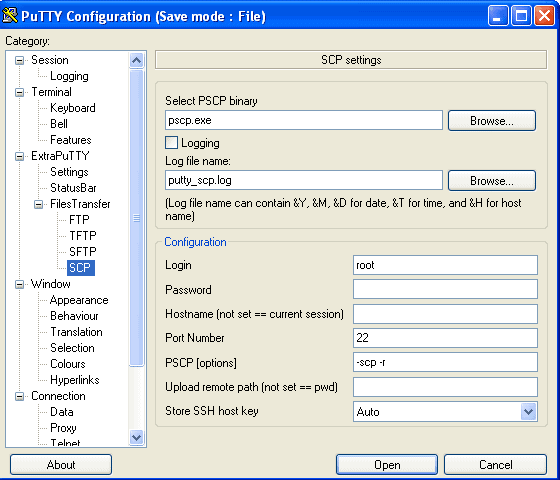 CP vs SCP: Understanding the Difference

If you have been using “cp command” on your local Linux machine, SCP won’t be difficult to understand. It is essential for both commands to have a source and destination file-system location to perform a copy operation. But the main difference here is that the SCP requires one or both of the locations to be on a remote system.

For instance, one might apply the below cp command:

This command would initiate a copy operation, where all the files in the directory pictures in user john’s main directory with a name starting with picture.png” would be copied into the directory “archive” in the “main” directory.

The same operation can be performed using SCP command:

As shown above, when using the SCP command with the login name John, those same files would be uploaded to the server myhost.com into the remote directory /main/john/archive. The SCP will let the uploading process initiate only if the user “john” provides his remote password.

A remote location could also be specified as a source if one needs to download the files. For instance,

on myhost.com with the name starting with “picture and ending in .png,” into the local directory /main/john/downloads.

Using SCP on a Remote Location

It’s also possible if a remote host is specified as both the source and the destination. For example, using the command below, a file can be transferred from one remote directory, that is on myhost.com, to another directory that is on the same server.

In another case, SCP can be used when a file transfers from one host to the other. Use the following command:

Take into account that the files that are transferred using SCP are secured and encrypted like the SSH and SFTP.

Before going into the explanation of how the SCP command works, let’s take a look at its basic syntax:

Knowing what SCP is and how it works is only the beginning.  There are tons of different options to choose from the SCP command. In this section, we will dig deep into understanding how the command works.

The following is a screenshot of the SCP command on Windows and a MacOS terminal. The command output varies from different OS.

For more understanding and clarification, let’s take a look at a few SCP examples. Remember to always specify the file with the URI form: [user@host]host[:port][/path/file] 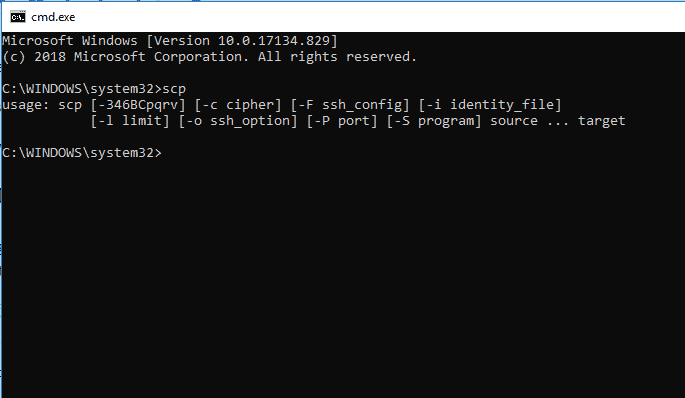 The previous command will copy file.txt to the remote host “example.computeruser.com.” The username that will be used to log in is, “user.”

The previous command will copy all the files that are in the remote directory “/main/hope” to the remote host “remotehost.com” into the local working directory.

The previous command will initiate the transfer of the remote file “/main/john/archive.zip” on the remote host “host.com” into the local working directory. The process would be initiated as the user “john”, and the transfer rate would be limited to 200 kilobytes per second.

Its operation is almost similar to the above command, but instead of initiating the direct file transfer from one remote host to the other, the transferred files would go through the localhost.

The SCP is a straightforward command yet powerful enough to provide secure file transfer between a local to a remote host. It is relatively similar to SFTP because it runs on the session layer and uses port 22.

The SCP command is based on the SSH and is also very secure. Unlike SFTP, it can’t remove or list files on the remote server. Although SCP can only transfer files, it can do it significantly faster than SFTP.

It is a handy command for users that spend a lot of time on the SSH protocol, like fast transferring speeds, and don’t care about managing the remote server.