When you leave your house in the morning, you (probably) lock the doors behind you. In a normal scenario, only people who have the keys to unlock your door should have access to your house. We do this for security reasons. In the same way, we may want to control who/what has access to different parts of our network and one of the ways we do this is using Access Control Lists (ACLs).

In this article, we will be doing a deep-dive into ACLs as applicable to network access control. We will consider the structure of an ACL, how ACLs are processed, and also how to apply configured ACLs. Furthermore, to make this article as practical as possible, we will consider a case study where we configure ACLs on a Cisco IOS device. The knowledge from this case study can be applied across devices from other vendors.

Note: ACLs are not only useful for filtering purposes; they also find application in other areas like Network Address Translation (NAT) configuration, matching which routes to advertise/accept in dynamic routing protocols, policy-based routing, and many more. Furthermore, ACLs are not restricted to networking as they are also used in other systems such as file systems to control access to files/objects.

Just like the phrase says, an Access Control List (ACL) is a list that controls access. This means that, when used for network access control, ACLs determine which hosts are allowed (or not allowed) to access other devices/destinations. This is typically done on a per-packet basis which means that each packet is checked against the ACL to determine whether to allow or deny that packet.

Note: ACLs can be used to check various fields in a packet including Layer 2 (e.g. MAC addresses), Layer 3 (e.g. IPv4 addresses), Layer 4 (e.g. TCP port number), and so on. In this article, we will restrict our discussion to Layer 3+. Furthermore, most ACLs are considered “stateless” which means that each packet in a flow is considered on its own, unlike stateful filtering which keeps track of the state of a connection.

Based on this description, an ACL can be broken down into two main parts:

ACEs make up the bulk of an ACL with each ACL containing one to as many entries allowed by a particular device. Without paying attention to the specific type of an ACL, an ACE is made up of the following:

Keep in mind that the source and destination components of ACEs are subjective, depending on the direction of the packet. Consider the diagram below:

There are two scenarios we can consider from the perspective of the router, R1:

When a packet is checked against an ACL, the following processing rules apply:

Let’s take an example to understand these processing rules. Imagine that we have an ACL with the following entries:

A3: This packet will not match the first three entries of the ACL. However, it will match the 4th entry because it is an HTTPS packet, with a source that is contained in the 192.168.1.0/24 subnet, and a destination that qualified as “any”. Therefore, this packet will be allowed.

A4: This packet will not match any entry in this ACL (only 192.168.1.100 is permitted to send HTTP traffic). Therefore, it will be denied assuming that the “implicit deny” rule applies to this ACL.

Just as it is ineffective to install a lock on your door and leave the house without locking the door, configuring ACLs without applying them is also pointless. When used for network access control/filtering, ACLs are typically applied on device interfaces, devices such as routers, multilayer switches, firewalls, and so on.

Generally speaking, an ACL can be applied in two directions on an interface: 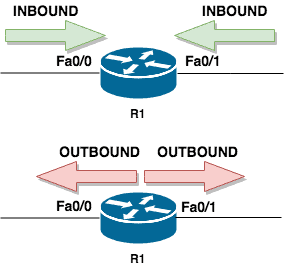 Now, imagine we want to apply an ACL on R1 such that only ping (ICMP) traffic from PC1 to PC2 should be allowed; where can we apply that ACL?

Tip: Something I learned a while back that may help with the understanding of ACL directions is to think of yourself as a router. Stand up and stretch out your arms by your side like you are forming a cross: traffic coming in from your fingers into your body is inbound while traffic going from your body to your fingers is outbound.

On Cisco IOS devices, there are two types of ACLs (at the minimum):

Note: Cisco has other types of ACLs such as time-based ACLs, reflexive ACLs, dynamic ACLs, and so on. However, these are beyond the scope of this article.

Irrespective of the type, ACLs on Cisco IOS devices can be named (e.g. “TESTACL”) or numbered (e.g. 100). Note that if using numbered ACLs, there are particular number ranges for standard and extended ACLs.

When specifying the source and destination addresses on an ACL in the Cisco IOS configuration, you use something called a Mask also known as an Inverse mask or Wildcard mask. At the basic level, the wildcard mask is just the subnet mask flipped i.e. 1s become 0 and 0s become 1. For example, the corresponding wildcard mask for the subnet mask 255.255.255.0 is 0.0.0.255.

Note: It will also match 10.1.1.0 but since this is a network address, it is not a valid source address on a packet.

Let’s use the following lab setup for our case study:

You can build this topology in GNS3 or Packet Tracer. The IP addresses have been configured on all interfaces and EIGRP is running on the network such that there is connectivity among all devices: 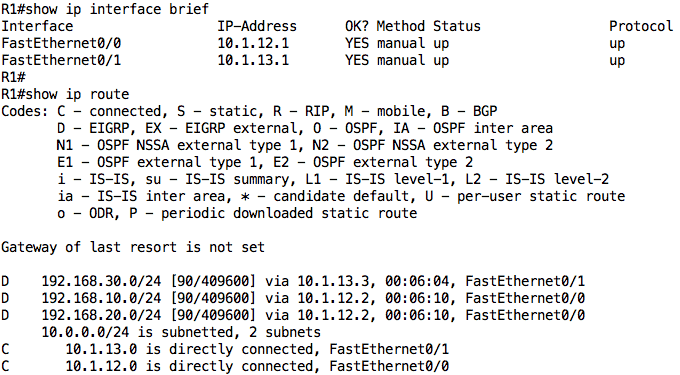 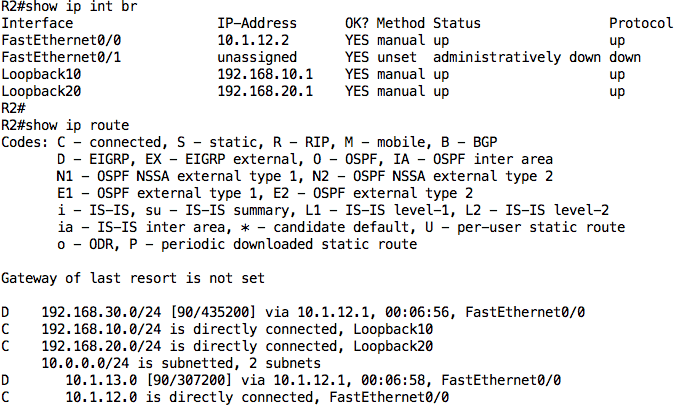 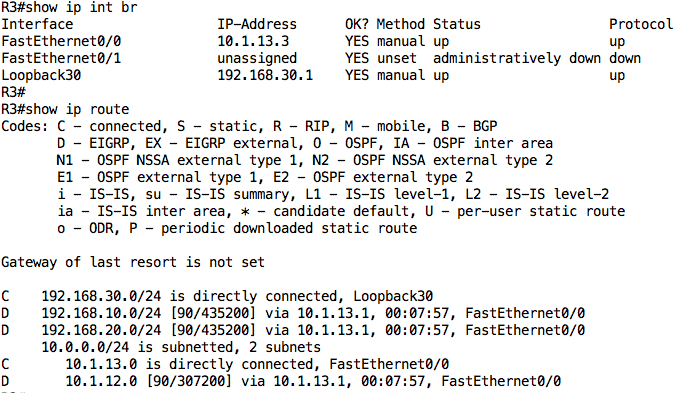 To test connectivity, I will ping R3 from R2’s loopback interfaces:

Let’s now configure an ACL on R1 such that the following conditions are met:

To configure an ACL on a Cisco IOS device, we use the following steps:

Therefore, the configuration to achieve this on R1 is as follows:

There are a couple of things to note about this configuration:

Notice the numbering: it starts at 10 and each new entry is added below the previous entry. I can use the show ip interface command to view the ACLs applied on an interface: 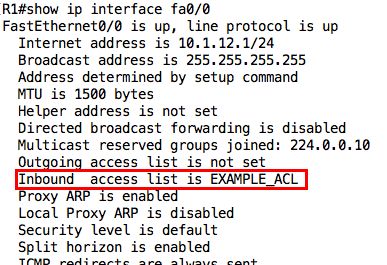 Note: You can apply up to two ACLs on an interface, one in each direction.

However, by applying this ACL, I have created a problem between R1 and R2:

The EIGRP relationship has been terminated because EIGRP packets are being denied by the “implicit deny” rule at the end of the ACL. We need to resolve this issue by explicitly allowing EIGRP packets in our ACL.

Warning: You need to be careful when editing an ACL since new ACEs are added at the bottom of the ACL (before the implicit deny). However, with named ACLs, you can specify the line number where you want an entry to be placed.

In our case, it does not matter where we add the entry to permit EIGRP traffic since there is no other entry that affects that traffic before the implicit deny rule. However, just to see how to add entries at any line of an ACL, let’s add the “permit eigrp any any” entry on line 5 of our ACL:

Cool! Our EIGRP relationship is back.

We can now go ahead to test our ACL. Remember that when testing ACLs, you should not only test what should be working, but also what should NOT be working.

We can check the counters on our ACL to see that this traffic was matched by the ACL:

We can check the counts on the ACL to ensure that the traffic really hit the ACL:

Here are some hints to help with your ACL implementation:

This brings us to the end of this article where we have looked at Access Control Lists in detail, focusing on how they are used for network filtering. We saw that ACLs are made up of Access Control Entries (ACEs) which either permit or deny traffic based on certain criteria.

We discussed processing rules for ACLs: top to bottom; stop once a match is made. We also looked at how ACLs can be applied to interfaces either in the inbound or outbound direction. Finally, we looked at a case study on implementing ACLs on Cisco IOS devices along with helpful hints.