There are a couple of troubleshooting tools that every network administrator must be familiar with including Ping and Traceroute.

However, one tool that is not quite as popular as these two but provides extra functionality is MTR (formerly known as Matt’s Traceroute; now My Traceroute).

So What is MTR?

MTR combines the functionality of both the Ping and traceroute Utilities (or alternatives of traceroute), providing a robust tool for troubleshooting purposes.

Since MTR combines the ping and traceroute utilities, we will look at these two utilities individually first and see how they can help with troubleshooting and then finally, we will see how MTR works.

It should be noted that ping is not always accurate – a firewall may be in the path between the sender and the receiver and that firewall may be filtering ICMP packets. Therefore, just because a host does not reply to ICMP does not mean it is unavailable.

Let’s do a quick test. I will ping yahoo.com and see if I will get a response:

Note: Ping works differently depending on the operating system. On Windows OS, ping will send a default of 4 packets and end by itself. On Unix-based systems and also MacOS, the ping will run until you stop it (using the CTRL+C keyboard combination). You can also run a continuous ping on Windows OS using the -t option.

As you can see from the output above, 8 ICMP echo request packets were sent and 8 ICMP echo reply packets were received back i.e. 0% packet loss. Another useful information is the round-trip time (RTT) which tells you how long it took for the packet to go from the sender to the receiver and then back.

You can use this information to diagnose the quality of the link between the sender and receiver. In this case, the shortest RTT was 139.49ms, the longest 243.377ms and the average (of the 8 packets) was 169.809ms. Generally speaking, you should pay attention to the average RTT except in cases where the standard deviation (stddev) is really high.

If we were to use Wireshark to capture packets as the ping was running, we will see the ICMP echo request and reply packets:

Finally, you can also use ping to troubleshoot DNS connectivity. If you ping a hostname, ping will first try to resolve that hostname to an IP address.

If it is unable to, then you know there may be an issue with your DNS:

Traceroute works a bit differently from ping. While ping will tell you whether or not a device is available, traceroute will tell you the path between the sender and the receiver. This can be very useful especially in cases where the entire network is under your administrative control.

For example, if you have two connections to different ISPs and you think traffic should be flowing out one ISP, you can use traceroute to confirm if this is true.

By default, when a router (or hop device) receives a packet, it decrements the time-to-live (TTL) and tries to forward the packet along.

However, if the TTL reaches zero, the device will drop the packet and send an ICMP Time Exceeded error packet (ICMP type 11 code 0) to the sender. Traceroute uses this behavior to determine hops between a sender and a receiver as follows:

Just like ping, Traceroute also measures the RTT, but this is done between the sender and each device in the path.

Note: On Unix-based systems and also MacOS, Traceroute sends UDP packets from the sender to the destination. On Windows system, Traceroute uses ICMP echo requests packets. Also, the command to invoke traceroute on Windows OS is “tracert” while it is “traceroute” on most other systems.

Also, notice that one of the devices has three asterisks (*) – this is probably because the device is configured to filter such traffic. Finally, notice that some of the IP addresses have been resolved to hostnames. This is the work of reverse DNS and it is enabled by default when you run traceroute.

Part of the corresponding Wireshark capture for the traceroute above is as follows:

Now that we have seen the two utilities that make up MTR, let us now look at What MTR is. Unlike Ping and Traceroute which are enabled by default on most systems, MTR may need to be installed on the system you want to use.

Just like ping and Traceroute, you run MTR using the mtr command followed by the destination address/hostname.

Note: You may need to run the mtr command using root privileges (sudo) on MacOS and Linux systems.

By default, when you run MTR, it continually polls the destination (and devices in the path) giving you real-time information about connectivity. You can stop it anytime using the CTRL+C combination or just pressing the q key.:

As you can see from the output above, MTR combines ping (RTT and packet loss) with traceroute (devices in the path between sender and receiver). Using this information, you can determine the following on your network:

Related Post: How To Test For Packet Loss On Windows

Running MTR in the default interactive mode can result in a lot of packets being sent continuously which may affect network performance. Therefore, we can run MTR in the “report” mode where 10 packets are sent by default to each device and the report of the network statistics is shown to us:

Note: You enable report mode using two hyphens (-) followed by report i.e. –report. Or you can simply use the -r option.

We can increase or decrease the number of packets that MTR sends in report mode using the -c option (or –report-cycles).

By default, when you run MTR, it will try to use reverse DNS to resolve IP addresses to hostnames. This can slow down your troubleshooting process especially if you are not interested in DNS or using DNS on your network. We can disable the DNS resolution process using the -n or –no-dns option.

Also, MTR sends successive packets every 1 second. This may be fine when a network is operating normally. However, during network congestion, packets usually arrive at a faster rate. We can use the -i option (or –interval) to specify how often we want MTR to send packets, thus simulating a congested network:

Notice that with a shorter interval between packets and sending 50 packets, I now see some packet loss between the source and some devices in the path.

Some applications like Voice are sensitive to jitter and you can use MTR to view the jitter along the path between source and destination. This information is not displayed by default but we can use the -o option (or –order) to specify the order of the fields we want to see. The field options are as follows: 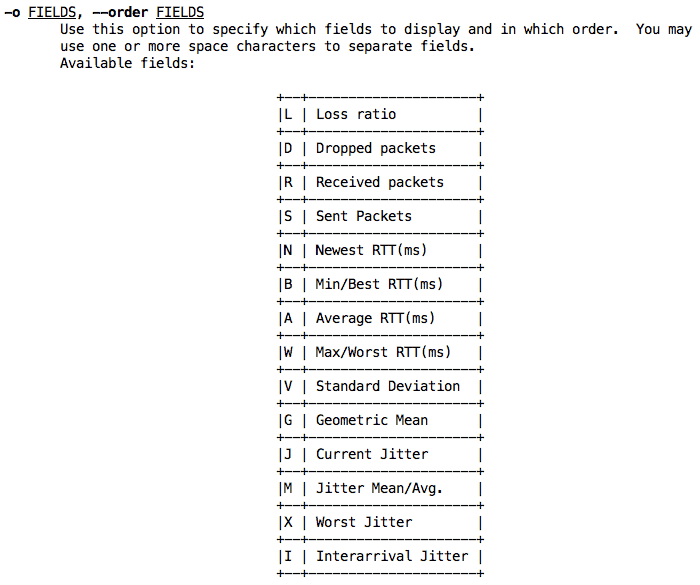 Let’s assume I want to view the average jitter and interarrival jitter along with the loss ratio, best/average/worst RTT and standard deviation, the command will be: mtr -o “L BAWV MI”

Related Post: Network Jitter – What is it and How to Monitor it

You can also ask MTR to attempt to lookup the AS number of the devices along the path between source and destination. This can be useful for several reasons like when troubleshooting BGP or if you will like to know which of the devices along the path belong in the same AS (i.e. under the same administrative control). We use the -z option (or –aslookup) to achieve this:

Note: You can also combine options together such as “-rnz” versus “-r -n -z”.

By default, MTR sends ICMP echo request packets and uses the ICMP time exceeded error message to determine the devices in the path between source and destination. However, some devices filter ICMP packets causing MTR not to report properly. One way around this is to change the way MTR works. Instead of sending ICMP, you can configure MTR to send UDP, TCP, or even SCTP (Stream Control Transmission Protocol) packets. You can also specify the port you want it to send to.

As an example, I tried using MTR on google.com and I noticed that the destination device was filtering my ICMP packets:

As you can see, I can now get all the way to my destination (google.com).

This brings us to the end of this article where we have discussed the MTR tool which is a network troubleshooting tool that combines both the ping and traceroute utilities. We have looked at several options that can be used with the MTR tool including the report mode, displaying packet jitter, and changing the default ICMP packets to TCP or UDP.

There are many other options on MTR that we have not considered in this article. On MacOS or Unix-based systems, you can use the “man mtr” command to view the various options. On WinMTR, just click on the Options button.