Your network is growing up and getting out of control.

You might have physical hosts and Virtual Machines distributed across the entire network, which you might want to get into the same network segment.

Stretching your VLANs could be a solution, as it can help you span your layer 2 across the physical network.

But the problem is that the number of VLANs runs out quickly and the solution is VxLAN.

With this technology, you can layer 2 networks on top of your existing layer 3 network.

All those distributed hosts can be kept together using VxLAN.

In this article, we'll provide an overview of VXLAN and you'll learn what it is, how it works, and where to use it.

You'll also learn about its benefits and deployment method.

It was initially designed to address the issues related to scalability in large-scale network deployments such as ISPs or cloud providers.

As the name implies, VxLAN virtually extends a layer 2 segment across the layer 3 network infrastructure. VxLAN encapsulates the layer 2 Ethernet frames inside a VXLAN packet that includes an IP address.

VxLAN segments are identified by a 24-bit VNID (VxLAN IDentification) field which can scale to 16 million segments.

The VxLAN is a standardized specification created by the collaboration of VMware, Cisco, and Arista Network vendors. VxLAN is defined in the RFC 7348

a. VxLAN vs. VLAN

The main difference is that VLAN uses the tag on the layer 2 frame for encapsulation and can scale up to 4000 VLANs.

VXLAN, on the other hand, encapsulates the MAC in UDP and is capable of scaling up to 16 million VxLAN segments.

b. What are VxLAN major advantages?

It is a fact that one of the significant benefits of VxLAN is scalability. But when you can span layer 2 networks across IP network infrastructure, there are also many more benefits.

VxLAN is an overlay encapsulation technology. It creates a virtual network overlaid on top of the existing physical network infrastructure.

It uses the underlay IP network and builds a flexible layer 2 overlay logical network on it.

With the overlay, any layer 2 connection can span across layer 3 network.

There are many advantages to using an overlay network.

The most obvious one is its segmentation.

The overlay network can be re-designed without needing to add, remove, or update network devices.

Of course, physical problems that affect performance or uptime of the underlay will be reflected on the overlay.

For example, if there are not enough devices to provide enough bandwidth, the overlay will also be affected.

How does the overlay VxLAN avoid being affected by underlay changes?

Using a switching fabric, referred to as the Spine-and-Leaf.

The best way to guarantee performance, scalability, reliability, and flexibility on a VxLAN overlay while allowing the underlay to change, is to make good use of a switching fabric topology.

The best example of a switching fabric topology is the Spine-and-Leaf, which is commonly used as an underlay network.

Spine-and-leaf is an independent architecture. It is not exclusive to VxLAN, but it is often associated with it.

Usually the spine-and-leaf is the underlay of the VxLAN is the overlay. 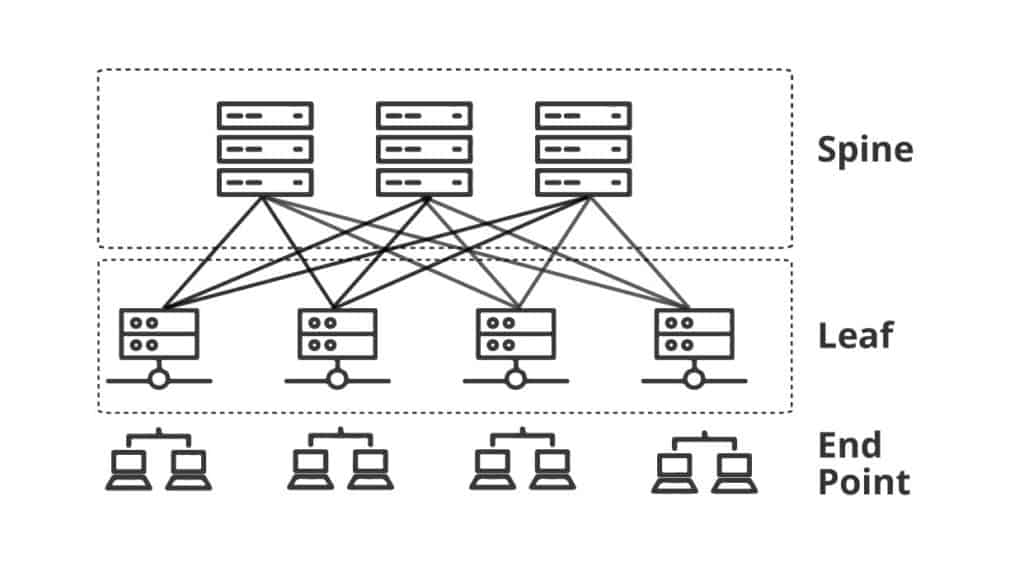 All the leaf switches have a link to every spine switch. Every link between leaf and switch is routed through an IP address by an IGP routing protocol such as BGP or OSPF.

This topology makes every destination only two hops away.

Leaf-and-switch may also use ECMP (Equal Cost Multi-Pathing) to recover when a spine switch or link fails or to balance the traffic loads.

The spine-and-leaf fabric topology is highly relevant to VxLAN because, as the overlay network scales, the supporting underlay can physically grow or decrease the size without affecting the design of the overlay.

As your network scales, your design doesn’t need to change.

You just need to add more switches, IP addresses, and links to the underlay.

We know so far that VxLAN stretches the layer 2 subnets across the layer 3 network limits. It builds a logical overlay network on top of a switching fabric like the Spine-and-Leaf.

To make this work, VxLAN encapsulates layer 2 Ethernet frames in a VxLAN packet that is also encapsulated in an IP UDP header.

VxLAN adds the following fields to the original Layer 2 frame.

Any endpoint like a host, switch, or router that supports VxLAN can be referred to as a VTPE (VxLAN Tunnel Endpoint).

As the name implies, the job of VTEPs is to create and terminate tunnels between each other. In other words, they encapsulate and decapsulate VxLAN traffic.

a. How does a VTEP work?

The VTPE is connected to the underlay network using a layer 3 IP address. VTPEs may have one or more VNIs associated with it.

When a layer 2 frame with the same VNI arrives at the ingress VTEP, it encapsulates the frame with a VxLAN and UDP/IP headers.

Then sends it over using the underlay IP network transport towards the egress VTPE for decapsulation.

The egress VTPE removes the IP and UDP headers and delivers the original layer 2 frame.

A VTEP can be either a virtual or a physical switch port and is usually configured on leaf switches.

In some cases, you might need a device to forward IP traffic and perform VxLAN encapsulation/decapsulation.

A bud node is a switching device with two roles, a VTEP to perform VxLAN related tasks and an IP transit device to forward VxLAN traffic.

In order to deliver traffic to other VTEPs, the bud node should be in the same multicast group used by the VxLAN VNIs.

The below screenshot shows an example of the bud node. Let’s say that host 1 wants to communicate with host 3.

The VTEP-2 and VTEP-3 belong to a multicast group used for VXLAN VNIs. The VTEP-2 checks the VxLAN ID from the packet and forwards it based on IP.

But if Host-1 wants to communicate with host-2, VTEP-2 can also decapsulate the VxLAN packet.

Not all platforms can be a bud node. Running two roles at the same time requires powerful processing power.

Platforms that run VxLAN on ASIC, such as the Cisco Nexus 9000 series, are adequate for this type of topology.

VTEPs may fail, so you would need to consider a way to provide redundancy and load sharing.

Although the design of the spine-and-leaf topology is already redundant and leaves are not supposed to connect to each other, you can still introduce peering between them to provide host-level redundancy.

Two leaf VTEPs gateways can act as one through peer-link and keep-alive links. You can accomplish this with a Cisco-based feature, called the vPC (Virtual Port-Channel).

vPC is a layer 2 feature found on the Cisco Nexus switches, which allows you to connect a host to two switches at the same time.

The pair of virtual vPC switches can provide redundancy to the attached hosts.

VxLAN is a standard-based technology, so it is not limited to a specific vendor and can be supported by hardware or software.

You can deploy the technology through a VxLAN host or VxLAN gateway. You can limit the deployment to one method or use a combination of both.

VxLAN doesn’t need to be deployed on a switch; it can also run on any host, as long as it natively supports VxLAN.

An example is a hypervisor, which can be configured to run VxLAN on all of its virtual machines.

The vSwitch running the functions of the VTEP, encapsulates traffic coming from the VMs before they go out to physical switches.

Since the VxLAN encapsulation is happening at the host, the rest of the network infrastructure only sees IP traffic.

The advantage of a host-based deployment is that the entire physical network can be simplified.

Other examples of hosts that may support VxLAN are servers, firewalls, load balancers, etc.

When hosts do not support VxLAN, the best way to deploy it is directly on a switch or router.

When a switch performs the VTEP functions, it is referred to as a VxLAN Gateway.

The switches can perform VxLAN encapsulation/decapsulation and can also translate the VLAN ID to VNI.

The VxLAN gateway creates the tunnel to the destination VTEP (either host or gateway), so the hosts and IP infrastructure are not aware of the existence of VxLAN.

A benefit of gateway-based deployments is that some platforms such as the Cisco Nexus 9000-EX are capable of implementing VxLAN on hardware.

Running VxLAN right from the ASIC, rather than from software, can increase performance dramatically.

You can also use a combination of both. A hybrid deployment is when you are using VxLAN with some devices behind a VxLAN Gateway and also have some hosts running native VxLAN.

6. Putting it all Together

Now that you know about Spine-and-leaf overlay topology, VxLAN encapsulation, and VTEPs, let’s go through the process of how VxLAN traffic flows from host to host in a simple VxLAN network.