With Ping, you might be able to know whether you have connectivity or not.

A simple binary, yes or no.

But traceroute takes native-OS network analytics to a higher level.

Traceroute will not only tell whether you have connectivity, but it will point out where is the problem precisely and why would that be happening.

In this article, we will discuss everything you want to know about traceroute.

Traceroute is a monitoring command commonly used by network and system administrators in their day-to-day operations.

This basic network diagnostic tool has three primary objectives, which give you an accurate and complete understanding of a network problem.

With Traceroute, you can?

Traceroute gives you complete information about the path that your data will take to reach its destination, without actually sending data (other than ICMP).

For example, if the source of the path (your computer) is in Boston, Massachusetts and the destination in San Jose, California (a Server), Traceroute will identify the complete path, each hop (the computers, routers, or any devices that comes in between the source and the destination) on the path, and the time it takes to go and come back.

How Does Traceroute Works?

Each IP packet sent on the Internet has a field known as Time-To-Live (TTL). But this field is not explicitly related to the time measured by the number of hops. It is instead, the maximum number of hops that a packet can travel across the Internet before it gets discarded.

The TTL field in an IP packet is so essential because if there wasn’t one, the packet would keep flowing from one router to another forever searching for its destination, in a never-ending loop.

The TTL value helps in route poisoning, and most importantly, it can help Distance Vector protocols to avoid routing loops.

Traceroute depends on TTL to measure the distance between source and destination and to find the hops in between.

In a traceroute, the source re-defines the TTL value every time it gets a response and sends the packet with TTL= +1 until it reaches its destination.

When a packet reaches its maximum TTL, the last hop in line will send back an “ICMP TTL Exceeded” packet back to the source.

This communication is what traceroute is looking for. The “ICMP TTL Exceeded” contains valuable information, such as the time it took to reach that particular hop and the name of the server that is replying.

What is the Difference between Tracert vs Traceroute?

Tracert and Traceroute have different syntax but both of these commands do the basic same thing.

What makes them different is the Operating System where they are executed, Tracert for Windows and Traceroute for Linux.

The other thing is how each command is implemented in the background.

On the foreground, you see the same kind of information for both cases. As a result of running tracert or traceroute, you will see the same route and transit delays of packets across the entire path.

Running a Trace Route on Windows, Linux, or MacOS.

Although the functionality is the same, the syntax and output are not. To run a traceroute command on a Windows, Linux, or macOS you need to follow the below instructions:

You can run a traceroute command on almost all Windows platforms, including, XP, Vista, Server, Windows 7, 8, 10, etc.

To perform a traceroute on any Linux OS, such as Debian, Red Hat, Ubuntu, etc

You can also run a traceroute command in your macOS.

During a non-Traceroute test such as Ping, the TTL would start with any value between 1 and 255, which is usually defined differently depending on the Operating System. 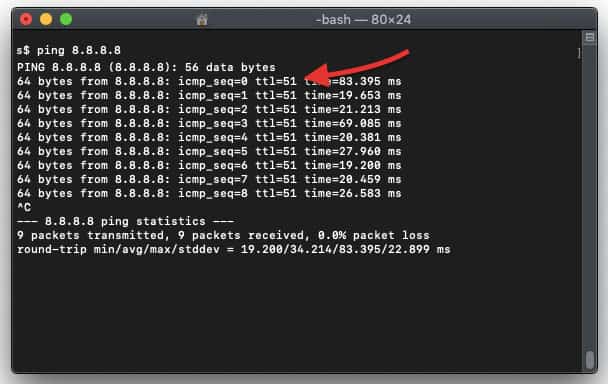 Your packet will start with a “hop limit of 51” to avoid any further loop, and it will travel a maximum of 51 hops to reach its destination before it gets discarded.

Each router that comes in between the source and destination will reduce the TTL before sending it to the next router.

This reduction of TTL by -1 will happen across the entire path until the packet reaches its destination or the TTL value limit reaches, and the last hop sends an ICMP TTL Exceeded message.

To help visualize the Ping example…

This computer won't be able to reach its destination, because there are more than ten hops towards server 8.8.8.8. 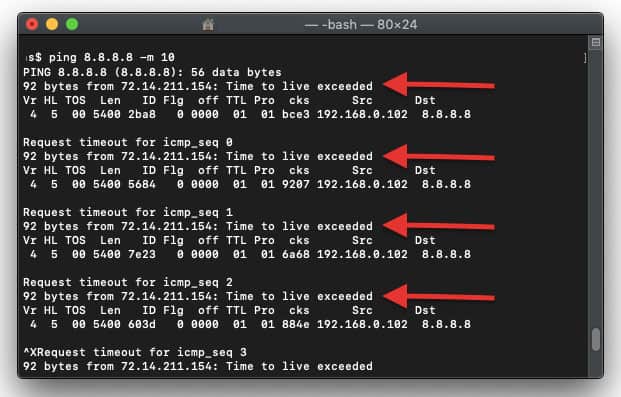 Traceroute starts its journey towards its destination differently. It begins with a TTL=1 (instead of the default 51) and adds one until it reaches its final destination.

When beginning the Traceroute test, the next hop that receives the packet with a TTL=1, which in my case, is the gateway, will execute the TTL-1 by protocol, which will result in TTL=0. That means there will be no further forwarding and the packet will be discarded.

The next-hop (my gateway) will notify the source that the TTL exceeded with the “ICMP TTL exceeded” message, containing valuable information such as IP, hostname, and delay.

As mentioned in the previous section, the main job of the Traceroute command is to +1 to the TTL until the packet reaches the final destination.

The tracert (for windows) command is available at the Command Prompt in all Windows operating systems including Windows 10, Windows 8, Windows 7, Windows XP, Windows Vista, and older versions of Windows as well.

The tracert command syntax is given below: 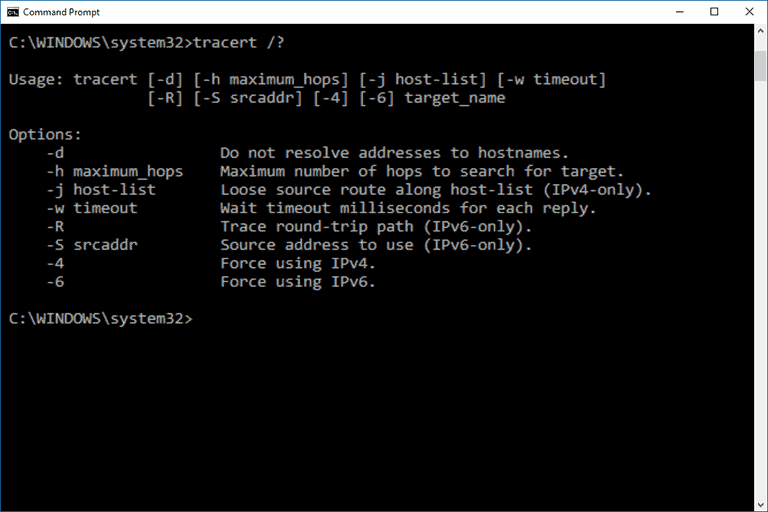 Below is a brief description with each tracert option in Windows…

Now that we know how traceroute works and its syntax, let’s find out how to read the output.

With the tracert example shown below, we're requesting the command to display the path from the local computer to the network device with the hostname “www.google.com” (with additional requests)

If you noticed Windows tracert output is different than Linux or macOS. There are five columns, the first is the number of hops, the next three columns are three ICMP (pings) with the delay, and finally the IP or hostname.

The other option we tested was timeout (-w 200). This is the maximum waiting time in milliseconds for each packet before it is considered lost. To read the delay columns, you can start with 1 ms, which is the hop to the gateway.

The traceroute command syntax for Linux can be written as: 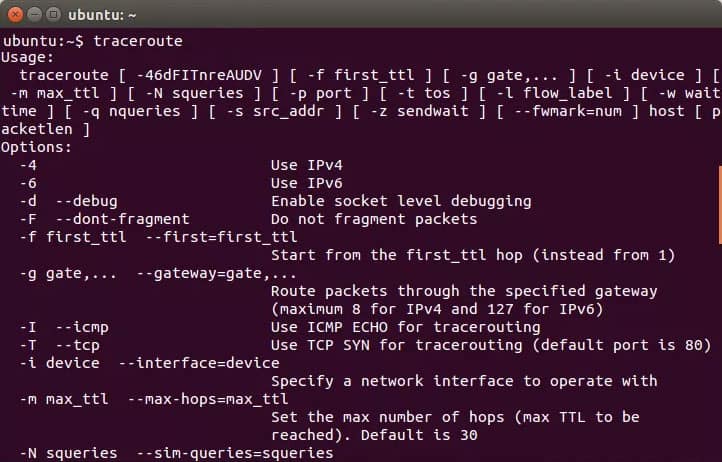 Below is a brief description with each traceroute option in Linux systems.

By default, tracert and traceroute will test the path only for IPv4 addresses. But that doesn’t mean you can’t test IPv6. All modern OSs come with full support for IPv6 addresses, including all commands, such as ping, traceroute, netstat, etc., to support IPv6.

To test a route for an IPv6 address, use the “tracert6” or “traceroute6” for Linux OS. The tracert6 command sends a sequence of User Datagram Protocol (UDP) to the destination host. While in the case of Windows, you can traceroute to IPv6 addresses using “tracert -6”.

Although it is underestimated, Traceroute is one of the best OS-native network analytics tools. It is not only capable of testing connectivity, as Ping does, but it also finds all hops in between source and destination, including names, and delay times.

And all of this is done with the same protocol that Ping uses, ICMP. Also, by altering a field in the IP packet, the TTL.

Some software developers are even creating a front-end version of traceroute and including things such as GUIs, Geographical maps, graphs, etc. All to make a simple tool even more powerful.

But if you understand the basics and some of the tricks shown in this article, you probably won’t need fancy software.

Traceroute comes in all OS out there, from Linux, Windows, UNIX-based, to macOS.

The underlying functionality is the same, but remember that there are few command syntax and output distinctions.