There are a couple of ways to set up an SFTP server in Ubuntu; one uses OpenSSH, the suite of secure networking utilities based on the Secure Shell (SSH) protocol. The second is using the FTP Server with Very Secure FTP Deamon (VSFTPD) and then running it through an SSH, but this second approach is not an SFTP but FTP over an SSH server. Third, you can leverage a cloud-based service to mount an SFTP server as a folder in Ubuntu.

In this guide, we are going to set up an SFTP server on Ubuntu 18.04 with OpenSSH. We’ll also create a user, a folder with permissions, restrict the access, configure firewall rules, configure authentication keys, and finally test our server.

Secure Shell (SSH) is a cryptographic networking protocol that gives users secure access to remote resources via unsecured networks. It creates a tunnel to allow remote command execution, login, and command-line, but it also protects any network service, including SFTP and SCP. SSH provides a secure channel using the client-server architecture. Therefore, it needs an SSH client to connect to an SSH server.

SFTP is not FTP over SSH or FTPS

SFTP is a file transfer protocol that provides manipulation capabilities and routes data through an SSH tunnel. Unfortunately, many people confuse FTP terms and end up configuring something they don’t need.

Although SFTP has the benefits of security that FTP does not, SFTP still has one drawback. By default, all SSH SFTP users can access directories and files from users outside their home directory. So, you’ll need to enforce some access control in case you are allowing multiple users access to your SFTP resources.

2. Ways to set up an SFTP server on Ubuntu?

There are different approaches to setup up an SFTP server.

a. Use the good old OpenSSH-server

OpenSSH is a collection of command-line networking tools based on the SSH protocol. OpenSSH is developed for OpenBSD Operating Systems, but now, it can be integrated into different systems, including Linux, macOS, and Windows. The OpenSSH includes demons and utilities like SFTP, an FTP replacement to securely copy files between computers, SCP, a substitute for RCP, and Deamon (sshd), the program for the SSH client. OpenSSH is the recommended path to take if you are configuring a dedicated SFTP server.

b. Use a standalone FTP server, like vsftpd or ProFTPD

VSFTPD is handy if you use UNIX-like or Linux, as it is the default FTP server for various Linux distributions, including Ubuntu, CentOS, RHEL, Fedora, and more. It is free and open-source and supports IPV6, TLS/SSL, and FTPS. In addition, VSFTP comes with a built-in jail functionality, which saves many headaches in terms of configuration overhead. Although VSFTPD is famous around the web as an SFTP server, the reality is that VSFTPD and SFTP are two completely different things. Still, VSFTPD can be configured as an FTP over the SSH approach, but still, this is not truly an SFTP server.

Use a third-party SFTP server and mount it as a folder to synchronize files into Ubuntu or other platforms. Files.com is an example of a cloud-based file-sharing solution used to mount an external SFTP server into Ubuntu as a folder. In addition, you can also set up Files.com as an SFTP client to make an existing SFTP server available via a web interface, API, SDKs, and other inbound SFTP connections. Access a 7-day free trial of Files.com

Which one to use?

OpenSSH is the true path to an SFTP server but requires more configuration and maintenance. On the other hand, VSFTP can configure a headache-less and more accessible maintenance FTP over an SSH server, but not an SFTP server. Finally, a third-party cloud-based SFTP server can be the easiest and fastest route but gives you less control.

3. Installing and Configuring the OpenSSH-server

We are going to set up an SFTP server on Ubuntu18.04, using OpenSSH. By default, Ubuntu Desktop and lightweight Ubuntu server come without sshd. So, we’ll need to install the SSH server using the following steps.

One of the only vulnerabilities when starting with SFTP is that, by default, any user can have access to the entire root folder structure. With OpenSSH, you can restrict access to users with a chroot jail environment. The chroot isolates processes and their children from the rest of the system. In addition, you’ll have to allow SFTP inbound and outbound traffic in Ubuntu’s UFW.

a. Create users and directories

First, we’ll create a user and group and make the user a group member.

b. Configuring the SFTP subsystem of SSH

As mentioned earlier, when using OpenSSH, you’ll need to restrict users to their home directory and subdirectories. You can do this via Jail (Chroot) to be limited. For example, to their directory when logging in. To do this, you’ll need to edit the user’s ​​ChrootDirectory at /etc/ssh/sshd_config 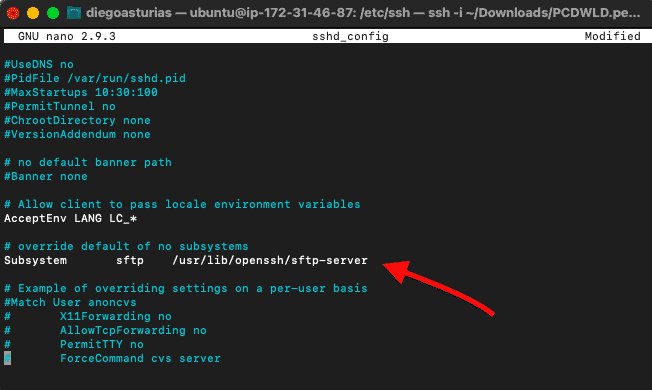 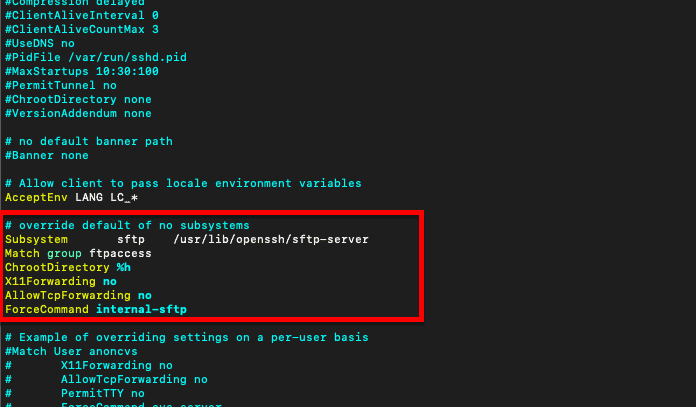 The SFTP server can authenticate using either credentials or keys. For security’s best practices, it is always recommended to use a set of keys.

In a PKI (Public Key Infrastructure) system, a pair of keys (private and public) are created and stored in separate places. Users hold a private key (which generates the public key), and the public key is shared with the server to authenticate.

Authenticate a new user in your SFTP server

If you want to allow your SFTP clients access via a pair of keys rather than credentials, you’ll need to do the following.

Test the login by remotely or locally connecting with SSH.

6. Connecting from an SFTP client using a key

To test the remote SFTP connection from your client to your server, you can use the “sftp” command from your macOS or Linux terminal. Bear in mind that you’ll have to specify it was appending the “-i” attribute if you are using keys.

From an SFTP client:

You can also use third-party tools like FileZilla client to connect to your server. 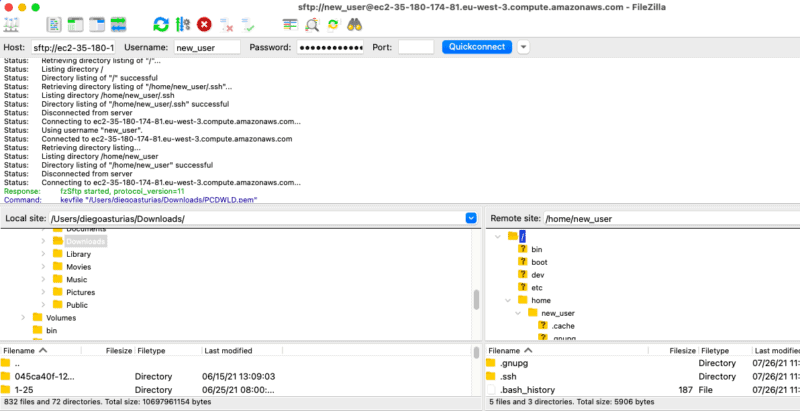 7. Extend your SFTP server functionality with an external service

To make the SFTP server available, use a third-party tool like Files.com to mount your SFTP server directly into Files.com as a folder. Files.com is a robust cloud-based file-sharing solution. It allows users to upload, download, share, and collaborate on any file using a wide variety of file-sharing mechanisms.

You can set Files.com as an “SFTP client” to make the SFTP server available via a web interface, API, SDKs, and other inbound SFTP connections.

In addition, you can also use Files.com and integrate it into your SFTP solution in two additional ways:

To set up an SFTP server in Ubuntu, use OpenSSH, as this is the right way to create your SFTP server. But with OpenSSH, you'll have some configuration to do. For example, by default, SFTP allows all users to access the entire directory, so you’ll need to restrict access. In addition, you can also use a cloud-based service like Files.com and allow SFTP access to your clients to a broad set of resources.