In this post, you’ll learn what a network topology is, how it is connected, classified, and types. Then, in the last section, we’ll introduce how to design and map them using the software.

What is Network Topology

Network topology refers to the logical or physical layout of a network. It maps the way nodes are placed and interconnected and also deals with the flow of data. The types of network nodes are clients or servers and links wired lines or wireless. And the flow refers to the direction of traffic; it is unidirectional or bidirectional.

The network topology clients can be workstations or computers, while servers can be infrastructure or networking nodes like hubs, switches, or routers. Ideally, clients would not need to forward data packets to other clients, but some network topologies that work without servers would have them do so.

The logical network topology deals with the protocols that control the “logical paths” on the network. While a logical topology depicts how devices “appear” connected, the physical topology is “actually how” devices are physically interconnected. Networks have both a physical and logical topology, but they don’t necessarily need to be the same. For instance, the popular LAN type, Ethernet, uses a logical bus topology in either a physical bus or star.

While network topology looks at the entire picture, a connection type defines how two-three elements are interconnected. Thus, network topologies are built either with point-to-point, point-to-multipoint, or multi-drop connections.

These qualities are relevant in networking because they can make or break the design. For instance, star, bus, or tree topologies use centralized systems (one server and many clients). Mesh, ring, and hybrid use decentralized (many servers to many clients) and distributed (the full mesh).

Below is a table describing a few differences between centralized, decentralized, and distributed.

The daisy-chain topology gets the name from the similarity of daisy flower chains. In electrical, electronic engineering, or computer networking, a linear daisy chain interconnects multiple devices point-to-point (one by one) in a sequence or series fashion.

In a daisy chain linear topology, the devices are connected via a two-way link. All the clients need two network ports, one for input (receiving) and another for output (transmission), except at each end. In this type of topology, the flow of data is unidirectional. If a computer in the middle expects a message, the package must travel across the entire chain until it reaches its destination.

In the ring topology, all the nodes connect to exactly two other nodes. So every node along the ring would need to handle traffic traveling across. These two nodes can be combined or via a switch. Ring topology is commonly used in the Metropolitan Area Network (MAN).

Ring topologies are known to have unidirectional traffic, although some implementations would also allow bidirectional traffic. Unidirectional flows reduce the chances of packet collisions, but they also introduce the single-point-of-failure. Unidirectional ring topology may use a Counter-rotating ring (C-Ring) to keep a certain degree of redundancy while avoiding collisions. If the loop breaks, the transmission can still happen by using the C-ring. If nodes have two connections between each node, the topology may use bidirectional traffic. This is known as the Dual Ring topology. The latter provides higher redundancy. In case of failure, the network stays online by changing the flow direction away (reverse) from the error (it reverts to linear). 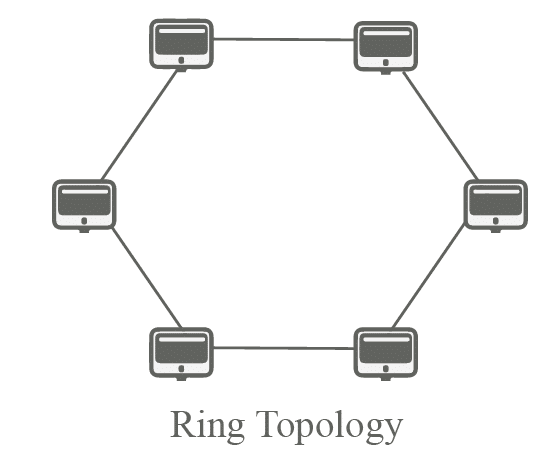 Token Ring is a logical ring topology but physically wired as a star. It is highly organized because it passes tokens along so that every device gets the chance to transmit. On the other hand, ring topology is the physical topology.

Bus topology is also referred to as line topology (or backbone topology). It can be either linear or distributed. A bus network topology uses a single line of cable running from end to end. All devices on the network are connected directly to this single line (or bus), which is commonly a half-duplex link coaxial cable. In a bus topology, every host (or station) receives all traffic and has the same priority for transmission.

Bus topologies are used in LANs, where the different nodes are linked to the one line or single backbone, so they must use CSMA or bus master to avoid collisions. This topology forms a single network segment and collision domain. To build it, you must use cable joints and terminals. 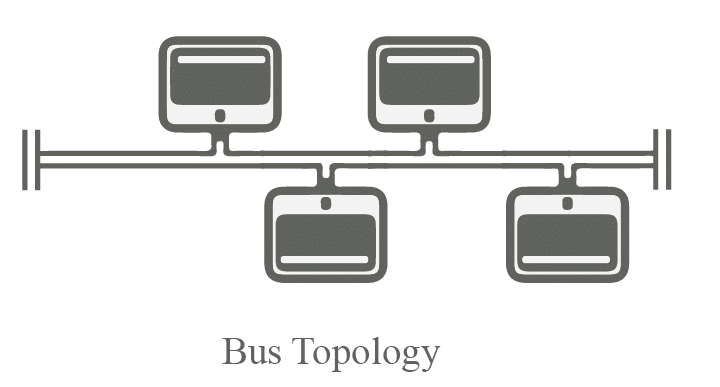 The star topology was influenced by the Spoke-and-Hub distribution model— a form of transport topology optimization. It started when traffic planners from passenger transportation and freight started to organize their routes as arrays of spokes connecting to a central hub. Soon, the efficient idea hit the IT sector, where they renamed it the “star network topology.”

This topology uses a single point-to-multipoint connection, and it is often used in WAN connections. In a WAN star topology, the hub (the main office) centralizes multiple geographically distant spokes or peripheral nodes (branch offices). All spokes are interconnected via the hub and never to each other. So, when a spoke needs to communicate with another, they will inevitably have to go through the hub. The star topology can be extended (where spokes use extension repeaters) or distributed star (daisy-chained ring-based individual networks). 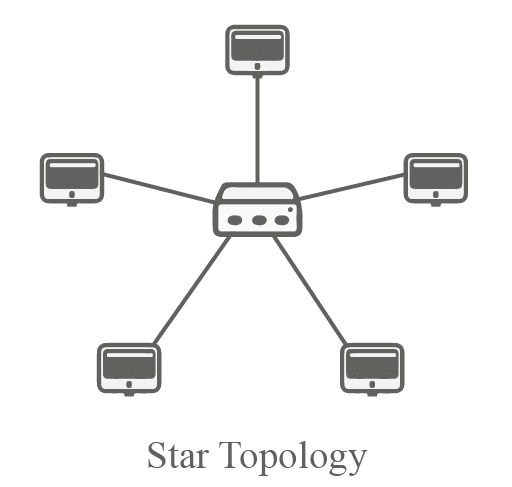 What stands out from the mesh topology is its reliability and redundancy. There is no central node or dependency on a single node that would act as a single-point-of-failure. Instead, every server node in the mesh participates in the information relay.

An example of a full mesh topology is the Leaf and Spine network architecture, a common topology in data centers. 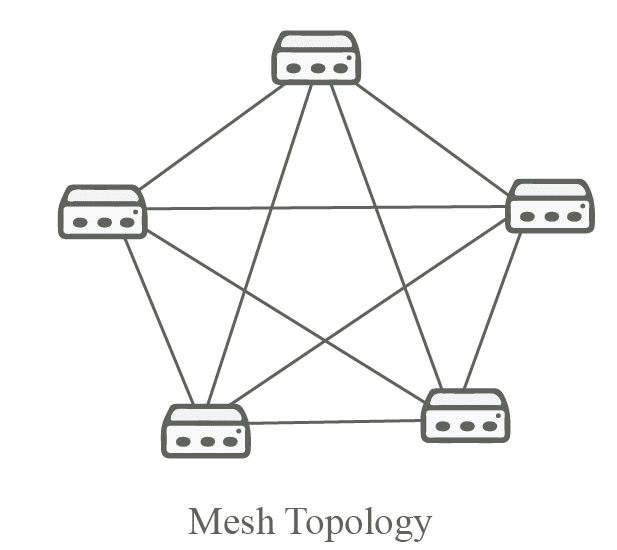 Modern networks are rarely designed using a single type of topology. Instead, designers leverage the advantages from each topology and combine them. For example, hybrid topologies are made by combining two or more topologies such as bus, star, ring, or linear.

Examples of hybrid topologies are: 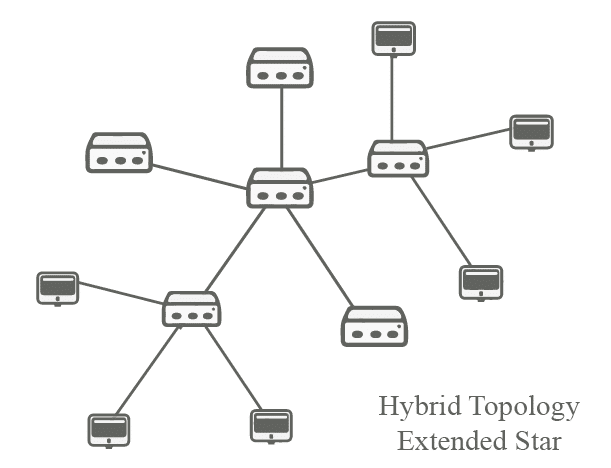 This topology gets its name from the way trees are structured. A central node or core serves as “the root or trunk” of the network, and additional nodes are extended outwards like branches from a tree.

Tree topologies are popular among WANs, first because they provide high scalability and second because they are flexible. 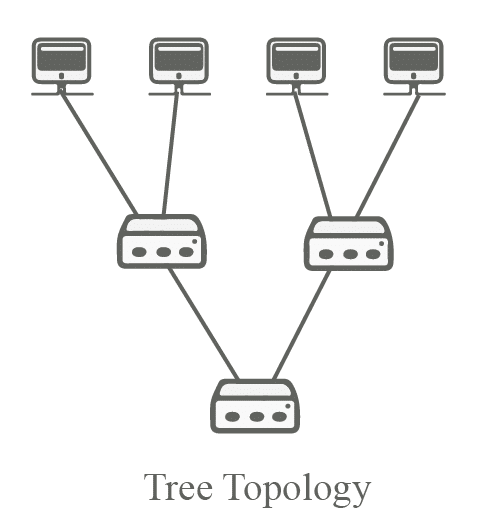 Note: To deal with the tree’s single-point-of-failure, network designers have to create active/standby (or load-balancing) implementations, which end up being costly. The redundant tree topology starts to resemble the full mesh topology.

Which topology is best for your network?

Before choosing one network topology over the other, first, consider the requirements of your business. For example, do you value speed and redundancy? or prefer a cost-efficient and simple implementation?

Consider that network quality like speed, security, performance, reliability, and redundancy varies from topology to topology. Always consider your available resources; How much are you willing to spend on hardware and cabling? Or in expertise?

To determine the optimal network topology for you, find the balance between costs, performance, reliability, and the scalability levels you wish to expect.

How to map your network topology

Although humans implement the network topology and structure, network mapping is best suited for software. There is some software capable of scanning and creating network topology diagrams. Such diagrams are vital for any network manager because they visually represent the physical and logical topologies. This allows managers to have better visibility over the nodes and the connections and do more efficient troubleshooting. 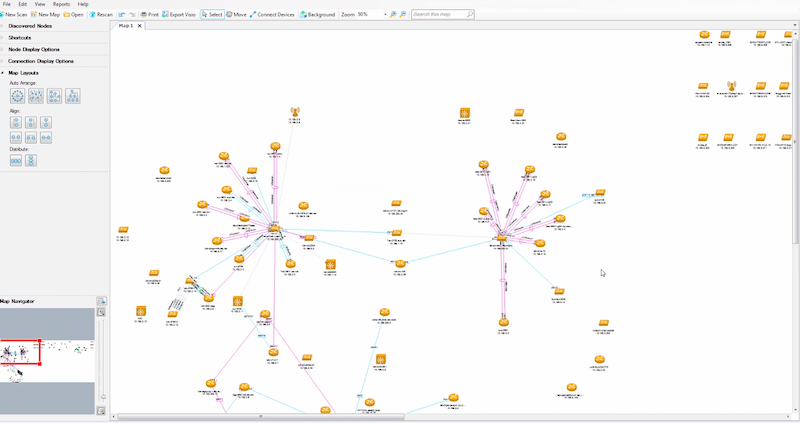 The SolarWinds Network Topology Mapper (NTM) is a network mapper tool designed to plot networks automatically. The tool shows the current network nodes and connections between them and specifies and updates their status. Furthermore, it displays such information in interrelated and scalable maps.

In this post, we went through the core concept of network topology. We learned the connection types, from point-to-point, point-to-multi-point, to multi-drops. We also saw their classifications. We know that they can be centralized, decentralized, or distributed. One, having disadvantages and advantages over the other.

We went into detail on every network topology, from the Linear “Daisy Chain”, Ring, Bus, Mesh, Hybrid to the Tree topology. We also learn how to determine the correct topology for you, its design and map them using specialty software.