Most people in the networking field are familiar with Subnetting – the process of breaking down a larger network into smaller networks (subnets). This is because Subnetting is one of those topics that can be difficult to understand and also comes up frequently in many Networking certification exams.

However, there is a less familiar twin sister called Supernetting which is just the opposite – combining/aggregating networks together to form a larger network.

In this article, we will be discussing Supernetting, why it is useful, and how to perform supernetting correctly. We will take examples and also see a case study on how supernetting affects the routing table on routers.

Note: There are several names for aggregating networks together including Supernetting, Route Aggregation, Summarization, and so on. While there may be some minor differences technically speaking, we will keep it simple and just consider them all as the same thing.

Supernetting is about aggregating networks together to form a larger network (a super network or supernet).

Warning: The diagram above is just for explanation purposes, comparing subnetting and supernetting. While Subnetting works on one network (and splits it down), Supernetting combines multiple networks into one versus the image that seems to suggest that it works on a single network.

Supernetting is mostly used in relation to route advertisement, but it also has other uses like when creating access control lists (ACLs), combining multiple static routes into one, and so on.

The main purpose of supernetting is reducing the size of the routing table on routers. For example, instead of a router having 8 individual routes (pointing to the same next hop), it can have an aggregated route of these 8 individual routes. This is important for several reasons:

Apart from the benefits to the routing table, it also helped slow down the exhaustion of IP addresses through the use of Classless Inter-Domain Routing (CIDR). Basically, instead of handing out a Class B network to everyone that needed more than one Class C network, these Class C networks could now be aggregated together as efficiently as possible using variable length prefixes (e.g. /19, /21, etc.).

Just like subnetting, supernetting is about counting in orders of 2 i.e. 2, 4, 8, 16, etc. When you create a supernet, you need to ensure that it covers only the networks you want to aggregate and not more. In fact, less is better so as to avoid routing issues which we will discuss in a later section.

The rules to create supernets are as follows:

Let’s take examples to explain these rules in detail. Consider the following lists of networks to be aggregated:

We will apply the rules to each list and if any one of the rules is broken, then we cannot create one supernet for all those networks without causing some issues.

Rule #2: Number of networks order of 2

Rule #3: Value of non-common octet in first IP block is zero or a multiple of the number of networks to be aggregated

Note: This rule is dependent on the previous rule being met. For example, even though 3 is a multiple of 6, 6 is not an order of 2.

Therefore, only Lists 1 and 5 can be aggregated into one supernet without causing any issues.

Once you have gone through the rules of supernetting above, you can now aggregate the networks by determining which of their bits are common and making all other bits from that point 0.

Note: We usually count binary from right to left, starting at 0. However, we humans are used to counting from left to right, starting at 1 and that’s why I have used that analogy here.

Note: We have considered scenarios where the block size of the networks to be summarized are all the same. In some cases (like exam questions), this may not be so. However, the same rules apply.

Should the rules be broken?

The reason we have the rules above is because supernetting can result in routing issues where a router is advertising a route it doesn’t have access to, as part of the aggregated route. For example, suppose a router has the following routes:

However, this over-summarization is fine in some networks. For example, an ISP that has been assigned the 191.236.0.0/20 address block should only advertise this aggregated route to its upstream peers even if it hasn’t used up all the individual sub-blocks in that address block. To avoid routing issues, the ISP can create null routes to those unassigned networks so that even if traffic is sent to those networks, it will be dropped.

Let’s see how supernetting helps to reduce the size of the routing table and also provide stability on a network.

Consider the network below. EIGRP is running on all routers: 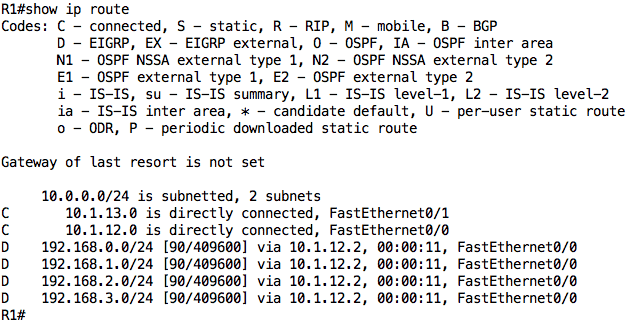 R3 also knows about these networks through R1: 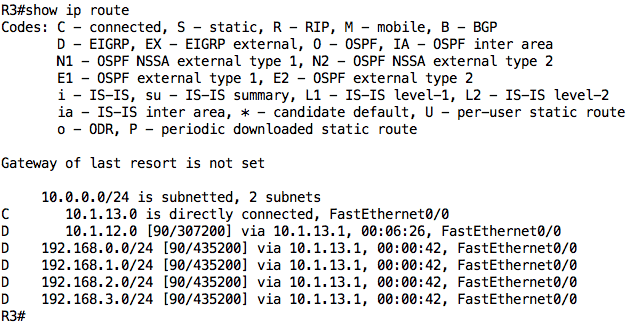 Now, if anything happens to any one of those networks, both R1 and R3 will hear about this update. To see this, I’ll enable EIGRP debugging on R1 and R3:

Looking at R1 and R3, we see that they “heard” about this change on the network: 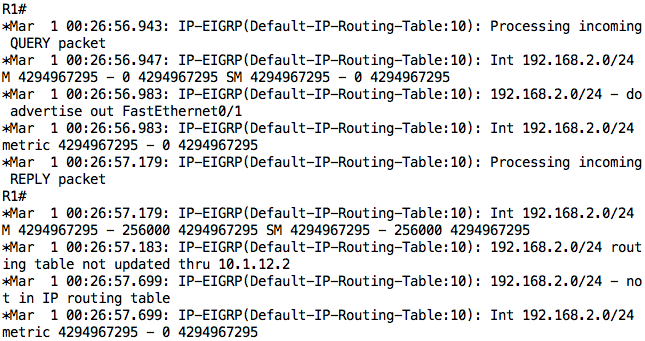 The first change we will notice is the routing tables of R1 and R3:

Next, any change that happens on R2 for those aggregated networks will only be advertised to routers that are direct neighbors of R2 i.e. only R1.

Basically, we have reduced the size of the routing table and isolated fluctuations to the aggregation point + 1, making the network less noisy and more stable.

This brings us to the end of this article where we have looked at supernetting – aggregating multiple networks into one. We highlighted some reasons to use supernetting and also the described rules to follow to create supernets properly. Finally, we discussed when the rules may be broken and also saw the effect of supernetting on a Cisco router.