Microsoft’s Windows PowerShell is a configuration management framework and automation engine that comprises a command-line shell and a scripting language to perform complex tasks.

PowerShell is cross-platform and runs on Windows, Linux, and macOS. No wonder why sysadmins and experienced Windows users mostly prefer PowerShell to automate tasks, including active directory and exchange. PowerShell is a modern and interactive Command-Line Interface (CLI) with some of the best features, including:

The Use of Windows PowerShell

PowerShell uses cmdlets commands and creates scripts to help administrators automate complex or time-consuming administrative tasks. Further, filter and share the computer data on a network. With its immense power and features, Windows PowerShell has become a core part of Windows Server 2008 and SQL Server 2008. Even the managed services providers (MSPs) have made up their minds to use the powerful tool for attaining more control in managing systems via text-based command-line interfaces (CLIs). The automation process will also make it much easier for MSPs (tasked with Active Directory management in a Windows network) to execute typical management tasks.

To build and test scripts and run commands, you can also use the Windows PowerShell Integrated Scripting Environment (ISE). This graphic user interface allows administrators to add the logic essential for developing scripts as command collections. If you need to run command sequences on a repetitive basis for system configuration, then it is an appropriate function for the administrators.

Cmdlets is a lightweight single-function command used in the Windows PowerShell environment to perform tasks, like managing event logs, copying or retrieving data files via WMI, and swapping directories. This Microsoft .NET program is designed to simplify routine administration tasks and access data stored in files systems, directories, registries, and other places in a computer.

The command is pronounced as a command-lets and is used to implement specific functions in the PowerShell environment. To view these commands or any specific one, run “Get-Command-Type Cmdlet” in Windows PowerShell. For example, to gain information about the objects, run “Get-Member” and for changing the current directory location, run the “Get-Location” command. In Windows PowerShell, you have complete access to view 130+ commands and write your own, if needed. Cmdlets can be used individually, but using cmdlets commands within scripts is highly effective.

PowerShell design works on the .NET framework, which allows it to perform less as a simple command-line program and more as a programming language. The command is also involved in PowerShell's pipeline semantics. It consists of the use of objects as recipients in a pipeline, i.e., to pass a cmdlet’s output to the other cmdlet’s input. As a result, this mechanism allows cmdlets to work together and configure the system data. Thus, making it one of the best tools for Windows configuration.

Why is PowerShell Using the Right Option for You?

As discussed earlier, MSPs also find PowerShell as a powerful tool. The scalability and other in-built features help automate management tasks and create insights across different networks. Further, PowerShell can improve your workflow in many ways:

Automate Complex Long tasks The use of cmdlets commands eases the configuration process, and you no longer have to perform administration tasks again and again. For example,

Allows working on Program limitations On a business-wide scale, the tool enables you to work on any software or program limitations, such as reconfiguring your settings on a network-wide scale. For example, if you want your users to apply a two-factor authentication process or change passwords monthly, PowerShell can work around your way.

Gain Access to More Information With the help of command-line interfaces, you can access all the information in a device file system. As a result, you can easily find the required information and later export it for reporting purposes.

Lastly, most Windows 10 devices have PowerShell pre-installed. Hence, it is not difficult to learn how to use the tool. Using PowerShell can be beneficial for a Managed Service Provider (MSP). All you require is to learn how to script cmdlets to make your process simple. As a result, PowerShell will help deliver accurate and fast service to its customers.

PowerShell is not any new version of the classic command-line interpreter. The Windows PowerShell 1.0 tool replaced Command Prompt in the year 2006. However, both programs run on Windows 10, yet PowerShell turned out to be a more robust and preferred choice by many (including Managed Service Providers).

The significant difference between the tools is that PowerShell prefers cmdlets rather than using commands. Also, the Command Prompt is limited to simple commands. However, some users still prefer Command Prompt if they are aware of the language. But, most people opt for PowerShell as it is gaining too much popularity, centered on objects, and grants access to more control over a network.  Furthermore, PowerShell is an open-source tool and grants more access to system administration tasks via cmdlets than Command Prompt. It is no more limited to only Windows but also runs programs on Linux and Mac OS X.

In short, PowerShell is a more powerful tool than the replaced one – Command Prompt.

How to Install PowerShell Module in Windows Server

In this section, we will show you how to install the AzureAD PowerShell module.

First, open the PowerShell windows and run the following command to bypass the Windows security policy. 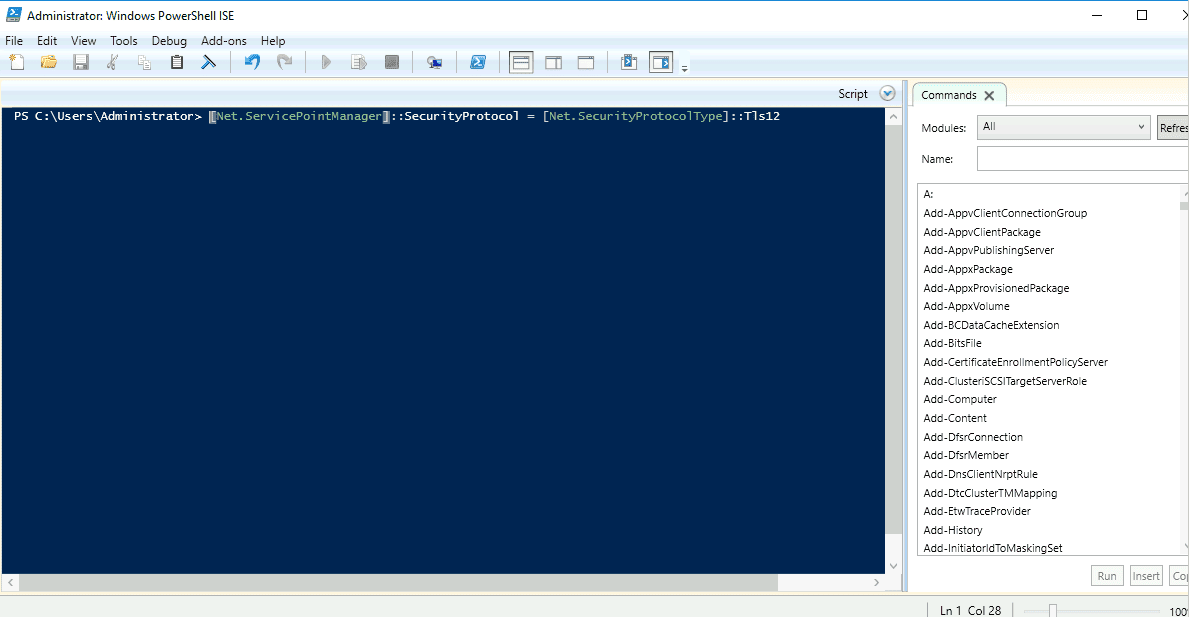 Next, install the AzureAD PowerShell module with the following command:

You will be asked to install the NuGet provider as shown below: 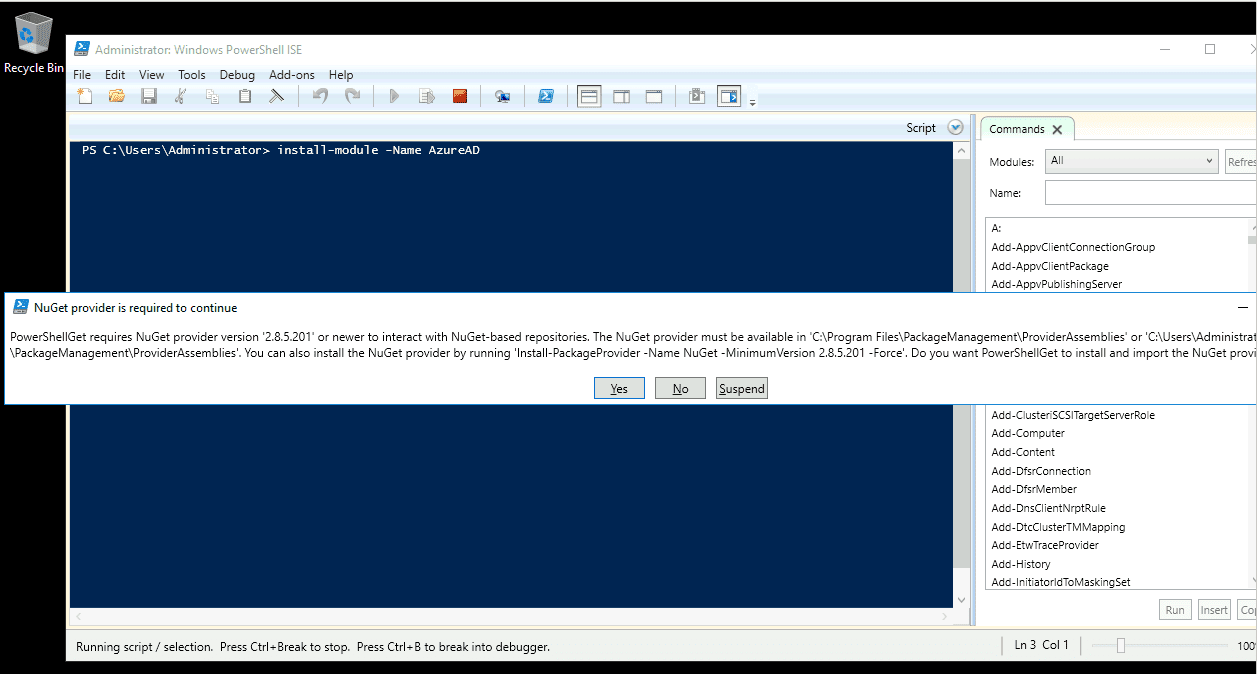 Click on Yes to proceed with the installation. You will be asked to install the module from the untrusted repository as shown below: 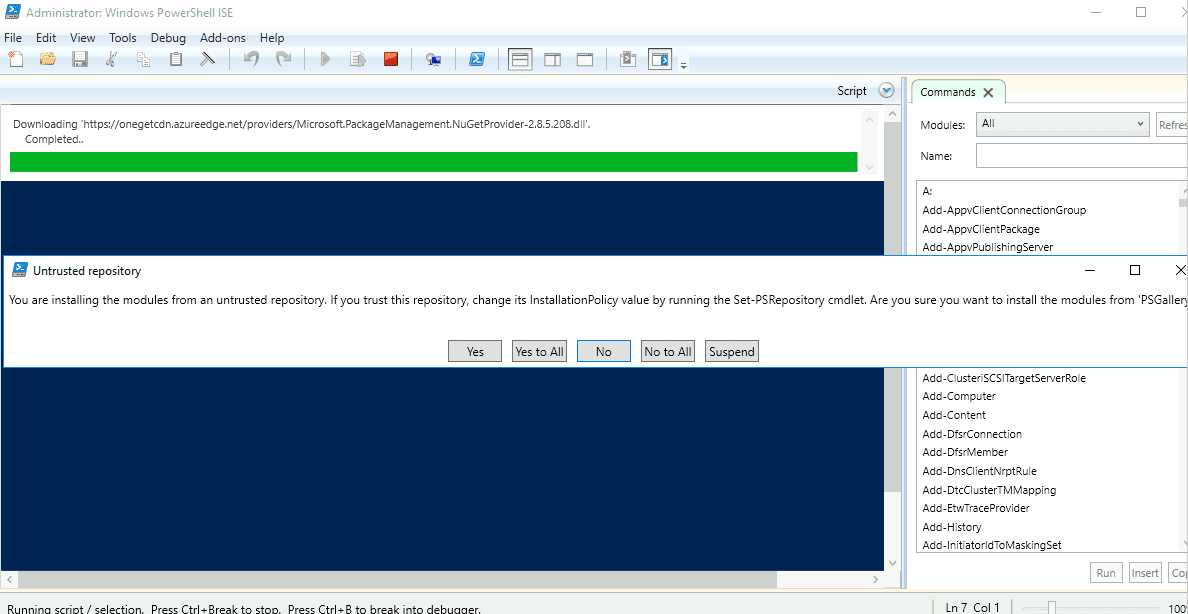 Click on the Yes to All button to install the AzureAD module.

You should see the following screen: 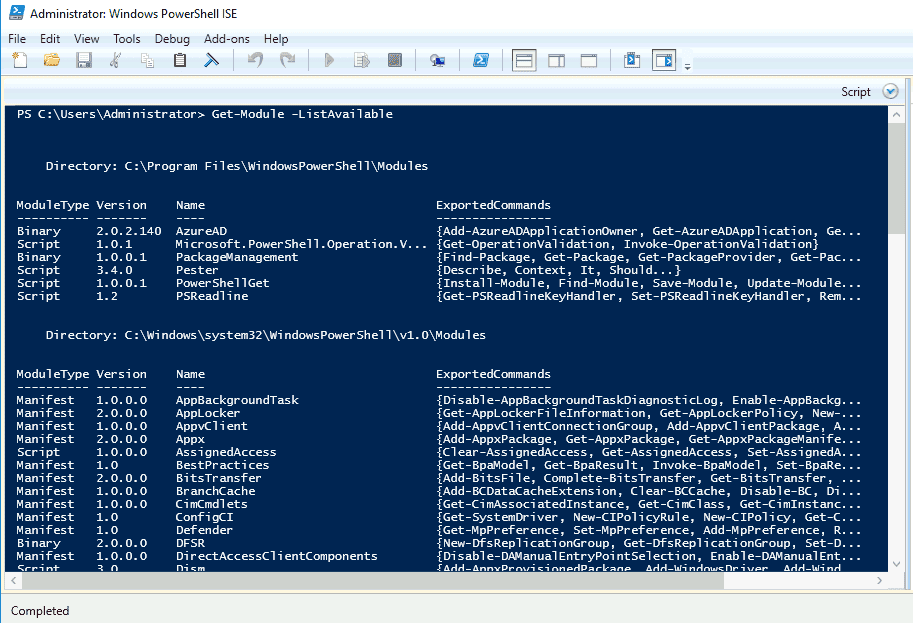 Next, run the following command to list all the available commands with this module:

You should see the following screen: 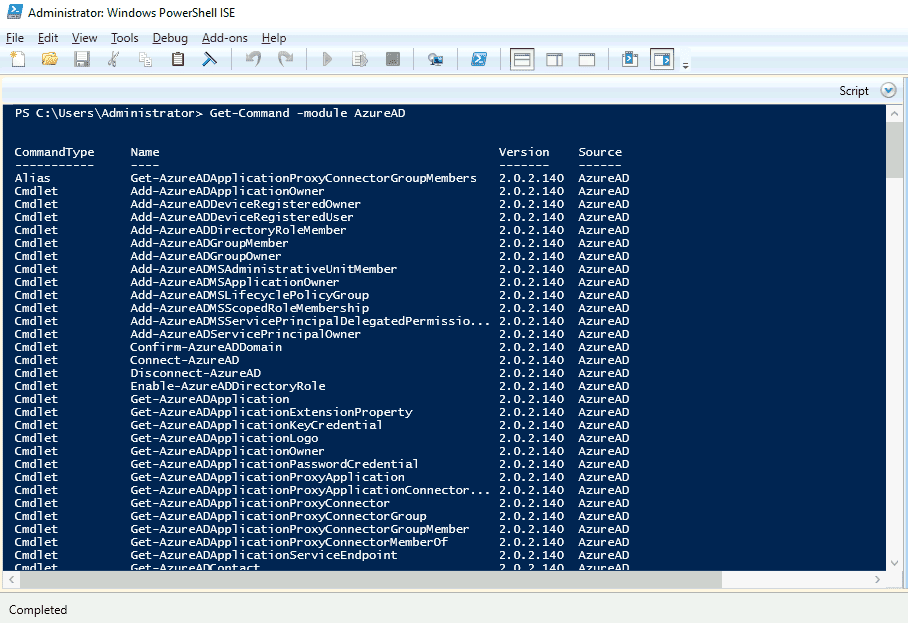 If you get any error during the PowerShell module installation, run the following command to set the execution policy to unrestricted:

In 2006, PowerShell emerged as a powerful alternative tool to perform complex administrative tasks with its command-line and script language. With this tool, it became much easier for the administrators to execute and automate system management tasks. The popular PowerShell tool operates on Windows, Linux, and Mac OS X. Instead of performing time-consuming and repetitive tasks, the user can simply switch to PowerShell and create scripts or issue commands faster. Cmdlets, PowerShell functions, Executable programs, PowerShell scripts are the four main commands of PowerShell. In addition, PowerShell is an open-source and cross-platform that can also create the complete database and transaction log backups.