As a novice in the Cisco networking world, I wondered how I will ever be able to “cram” all the possible Cisco IOS commands. Of course, I have come to realize that you definitely don’t need to know all the commands available on the Cisco IOS (probably not even realistic; that’s what the “?” help is for).

However, you will be better off knowing the commands necessary to configure common features such as host names, IP addresses, access control lists, routing protocols, and so on which is where a cisco commands cheat sheet comes in really handy. Even more important is the skill to know which show command to use to view certain information on the device.

Imagine that you are a freelancer and you have just gotten a project to troubleshoot a network made up of Cisco IOS devices as shown below: 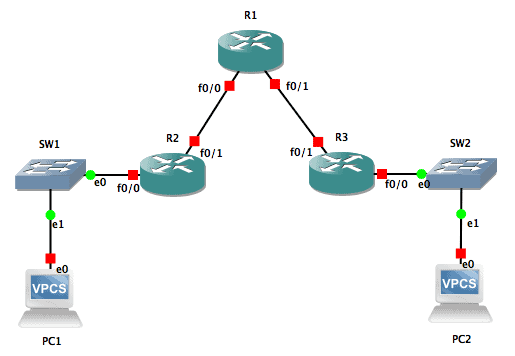 The only information you have been given is the IP address table below, which shows how the network should be configured:

You have been told that the two PCs cannot communicate with each other. Since this is a network you are not familiar with, you will need to use some commands to quickly come up to speed on the state of the network, and possibly find and fix the issues discovered.

Using this scenario, let’s look at five (5) common show commands you are likely to use during your troubleshooting exercise.

The first command on the list is the show running-config command. This command shows you the entire configuration that is currently running on the Cisco IOS device. This is as opposed to the “startup configuration” which is the configuration used by the device when it starts/boots up.

Back to our scenario, you can use the show running-config command to quickly get an idea of the configuration on the device. You will want to pay attention to interface configurations, access control lists (if any), NAT configurations if available, and so on.

Note: Most people abbreviate the show running-config as show run or even sh run which is also accepted on Cisco devices.

For example, the running configuration on R1 is as shown below: 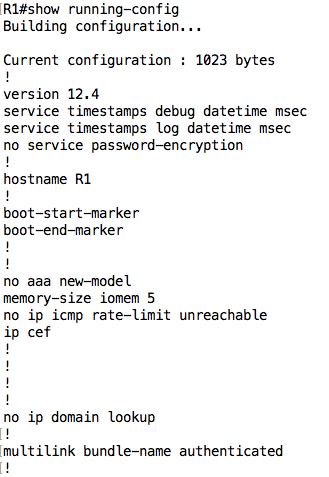 You probably don’t want to spend too much time going through the entire configuration at once because it can get overwhelming especially for large configuration files. As such, you can move on to other show commands that deal with specific areas (discussed below), or you can use some of the options associated with the show running-config command: 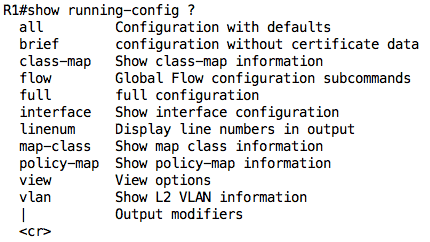 For example, we can view the configuration on a particular interface using the show running-config interface <interface name> command: 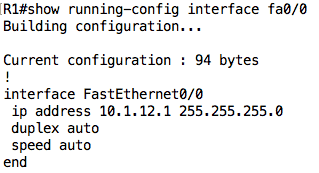 The next command on the list is the show ip interface brief command, usually abbreviated as show ip int br. This is one of the most useful Cisco IOS commands because it allows you to quickly see all the interfaces on a Cisco device, their IP address, their method of configuration (manual, DHCP, TFTP, etc.), and their hardware and line protocol status.

Note: This command does not show you the subnet mask configured on an interface. To view the subnet mask, you can use the show ip interface command without the brief option.

We can confirm using the show running-config interface command: 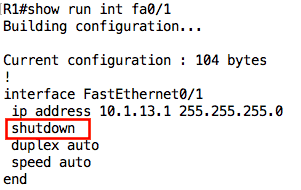 We can fix this by going under the interface and issuing the no shutdown command:

Everything seems to be fine on R3. Just to be on the safe side, let’s confirm the subnet masks configured on those interfaces using the plain show ip interface command: 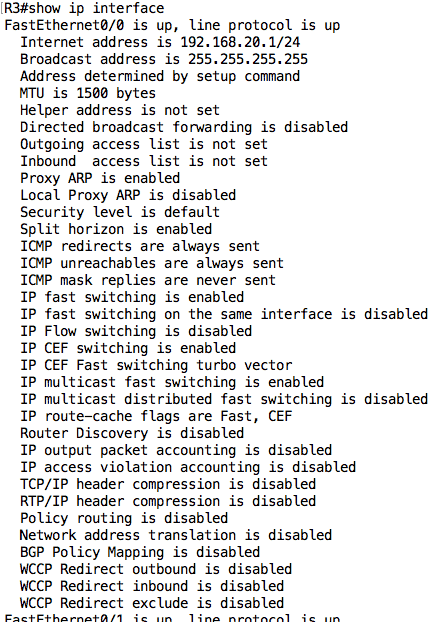 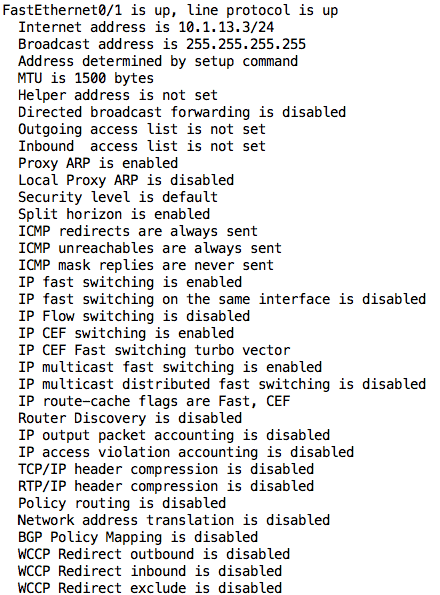 As you can see, the show ip interface command without any options also provides a lot of useful information such as access control lists applied on an interface, policy routing and NAT configuration, and even the type of packet switching being used on that interface (e.g. CEF).

The next command we will consider is the show interfaces command, usually abbreviated as show int. This command deals more with the physical attributes of the interface such as the MAC address, duplex settings, and input/output packet statistics, unlike the previous show ip interface command that focuses more on Layer 3+ configuration. If this command is used without options, it will display information about all the interfaces on the device.

You can also specify a particular interface to view: 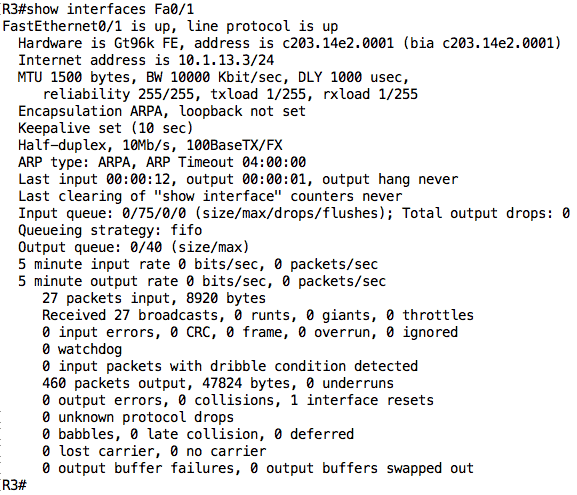 Even though this command is not useful in our particular troubleshooting scenario, let’s look at some sections of the output of this command:

Whenever you are troubleshooting a Layer 3 problem, you always need to make sure that basic routing is working which is where the next command comes in – show ip route. This command provides information about the IPv4 routing table on the Cisco device, including connected and non-connected routes.

Tip: The equivalent command for IPv6 is show ipv6 route.

Note: On some Cisco IOS versions, each connected route will have an associated “L” route showing the particular IP address configured on the interface (as a /32).

The EIGRP route tells me that R1 is running EIGRP and from the next-hop information, I can see that the EIGRP neighbor is R2. Therefore, all things being equal, if I ping PC1 (192.168.10.100) from R1, it should go through because R1 has a route to that destination (and PC1 is configured to use R2 as its default gateway):

For this task, we will assume that static routes should be used. Therefore, I will configure a static route on R1 for the 192.168.20.0/24 subnet pointing to R3:

If we check the routing table on R1 again, that route should be there (marked as “S” for static):

Let’s now move to R2 and check its own routing table: 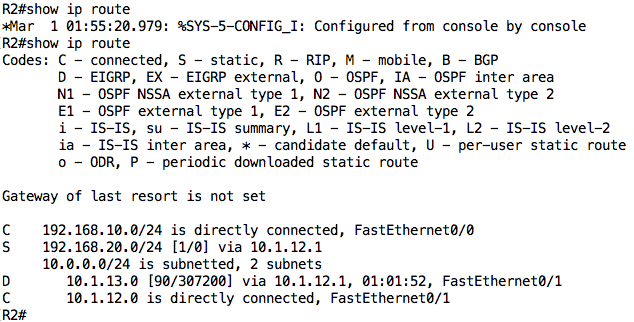 With its current routing table, R3 can only communicate with devices on directly connected networks i.e. R1 and PC2. Let’s configure a default route on R3 such that all traffic to unknown destinations is sent to R1:

Looking at the output above, we notice two changes (which are related):

With this configuration, PC1 should now be able to ping PC2 since there is end-to-end routing on the network:

Before we leave the show ip route command, note that it has several options including viewing information about a specific route and about specific routing protocols: 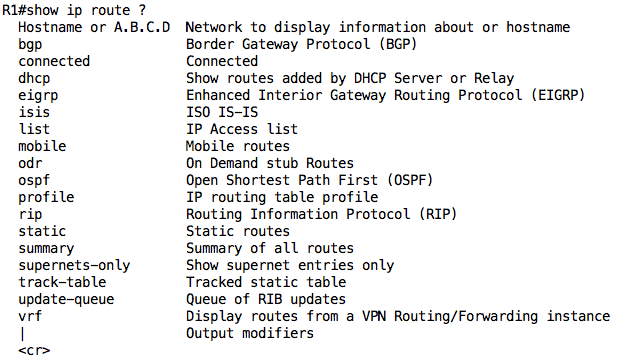 Examples are as shown below:

Even though our troubleshooting session is now done and we have fixed the problem, the last useful Cisco IOS command we will talk about is the show version command. This command provides the software and hardware details of a device. 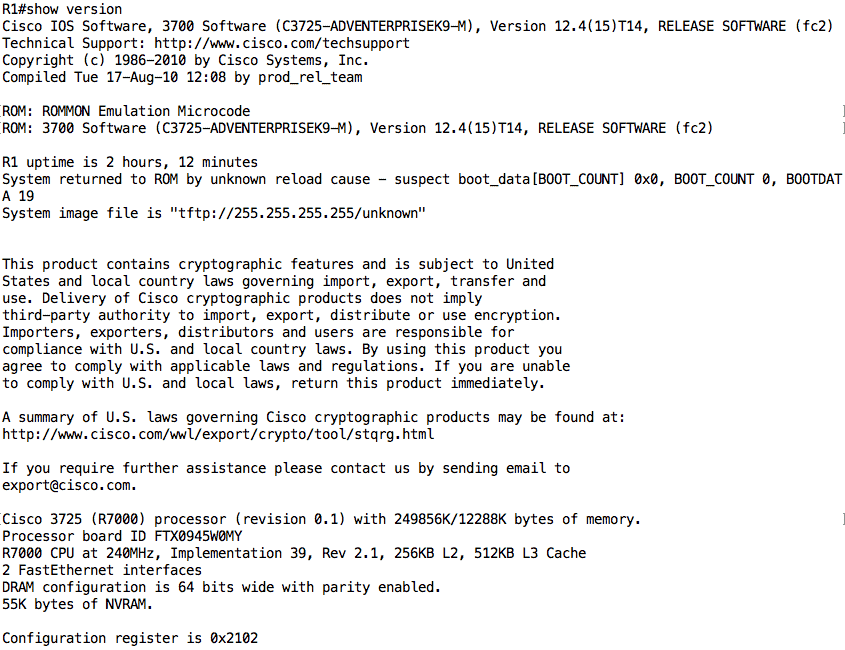 Here are examples of when information from the show version command can come in handy:

Two features that can improve the experience of using show commands are:

Here is an example without and with the do command:

Below is an example of piping:

The options that can be used with the pipe are as shown below (subject to device/IOS version):

Of course, you can combine both features:

This brings us to the end of this article where we have looked at five (5) common Cisco IOS commands including: