Although Apache server has a good reputation for its embedded security, it still has optional default functionalities, that if not correctly configured, can put your server at risk. So, it is vital to follow specific security practices that will improve the security standpoint of your server.

In this step-by-step guide to securing your Apache web server, we’ll go through some of these best practices, including updates, backups, installing and removing unnecessary modules, setting up a WAF, and more. To demonstrate step-by-step, we’ll use the Apache server installed on Ubuntu 20.04.2 LTS running on an AWS EC2.

One of the most critical security measurements for any server is updates. When you update and upgrade your Apache server regularly with the latest version, you’re ensuring the latest features and security fixes (patches).

Updating your Apache web server is straightforward. All you need to do is backup, install prerequisites, add a repository, and update.

a. Back up your Apache configuration file

Before updating and tweaking the security settings of your Apache server it is of paramount importance to backup up your Apache’s configuration file. Depending on the Apache installation and distribution, your “httpd.conf or apache2.conf” might be located on paths like:

Run the following command to create a backup of your configuration file.
This command will create an “apache2.conf.bak” and save it under the same folder as “apache2.conf”

b. Add an updated Apache2 repository.

Run the following commands to add and update the Apache2 PPA repository. The first command (software-properties-common) is a prerequisite package. It provides useful scripts for adding or removing PPAs. 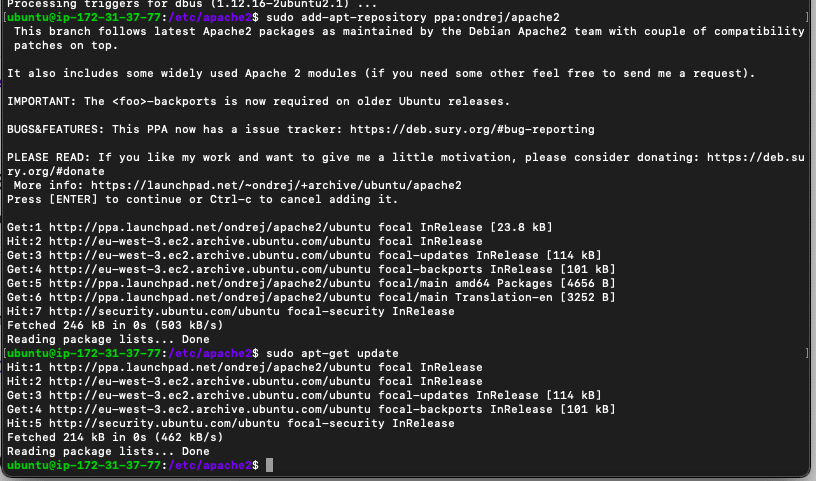 Bear in mind that updating is not enough. The update command keeps the package list up to date with the latest available versions, but it does not install (upgrades) the package.
So to make your update take effect, you’ll need to upgrade.

Running the (apt-get update) followed by the (upgrade) commands is relatively a safe operation. This is because these commands only download and install bug fixes and security patches.

BUT WAIT! Before upgrading, especially if you are upgrading a web server in production, keep in mind the following:

To upgrade, run the following command:

By default, your Apache web server responds to specific requests made by clients. Some of these responses contain sensitive information, such as web server version number, server’s OS details, the Apache modules, and more.

While gathering intelligence, a hacker can gain a good deal of fingerprint information by simply getting the webserver itself to provide server-generated documents. Attackers can then exploit vulnerabilities on these systems and try to gain access.

a. Disable ServerSignature and set ServerTokens to Prod

Add (or modify) the two lines below the configuration file. 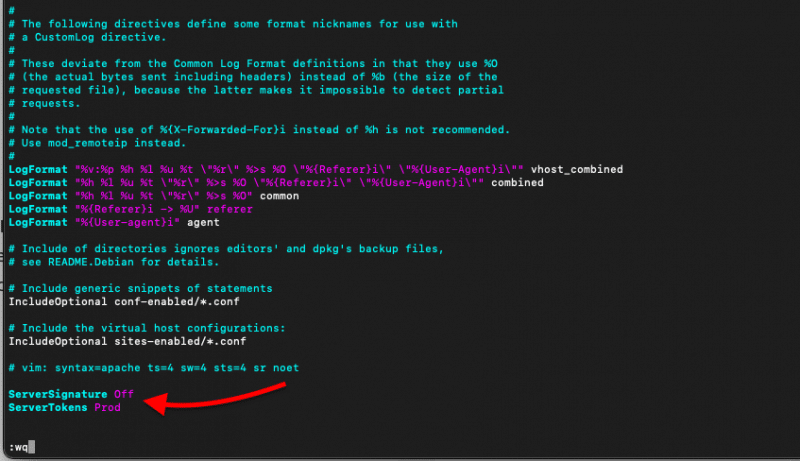 Restart the Apache service, and check whether it is enabled.

b. Disable mod_info and mod_status

The mod_status provides useful /server-status information while the mod_info provides the /server-info.

By default, these modules are enabled. With the mod_info module, the entire system’s configuration information may be visible from the “/server-info” page. This page exposes sensitive information such as server version, database names, system paths, and more. The mod_file is configured and viewed under the <Location /server-info>, (example.com/server-info, for example).

These two (mod_info and mod_status) modules are beneficial for administration and monitoring. However, if you need to use them, you can secure them by using the HTTP Basic Auth or make them only accessible from localhost (127.0.0.1).

To disable the server-info directive

you’ll need to comment out (#) the mod_info module found in Apache’s configuration file.

The status module (mod_status) helps an Apache server admin know the performance and health of the server. When this module is enabled, the directive <Location /server-status> shows an HTML page with information such as server uptime, load, current HTTP request, and client’s IP addresses. If a hacker has access to this information, they can craft an attack like a DDoS and bring the website’s service down.

To disable the server-status directive

you’ll also need to comment the LoadModule on mod_status and comment out the configuration on the “httpd.conf” or “apache2.conf” file. 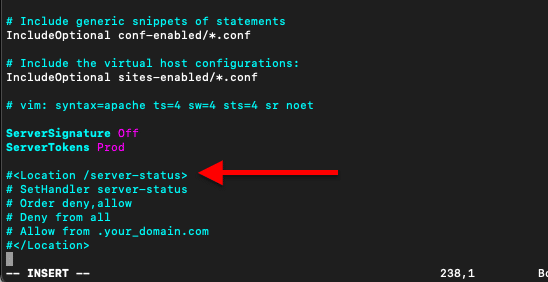 By default, the Apache server will list all the contents of the root directory. If this directive is enabled, an attacker could find and view any file and reverse-engineer an application to get its source code.

To turn off this directory listing for a specific directory, for example, within your website/directory, you would need to modify the “Options” directive in the configuration (httpd.conf or apache2.conf) file., 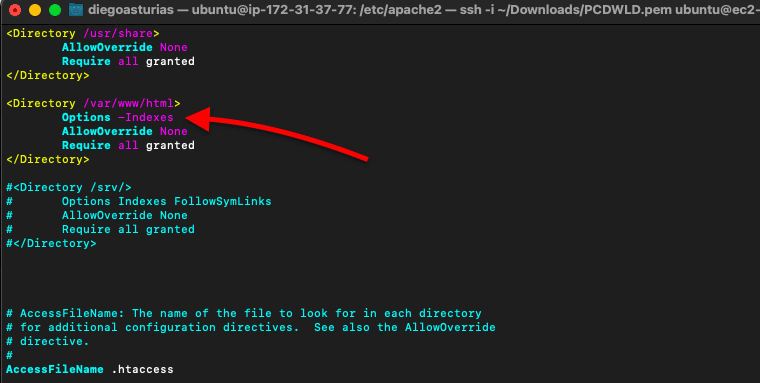 By default, the Apache server comes with many pre-installed and enabled modules (as mod_status and mod_info). If you are not using a specific module, it is better to disable it. Leaving all modules enabled might make everything work smoothly, but it also opens many doors for security vulnerabilities.

Use Apache’s official module index to learn about all the available modules. To get a list of all currently loaded modules in your Apache server and which ones you are not currently using, use the following command: 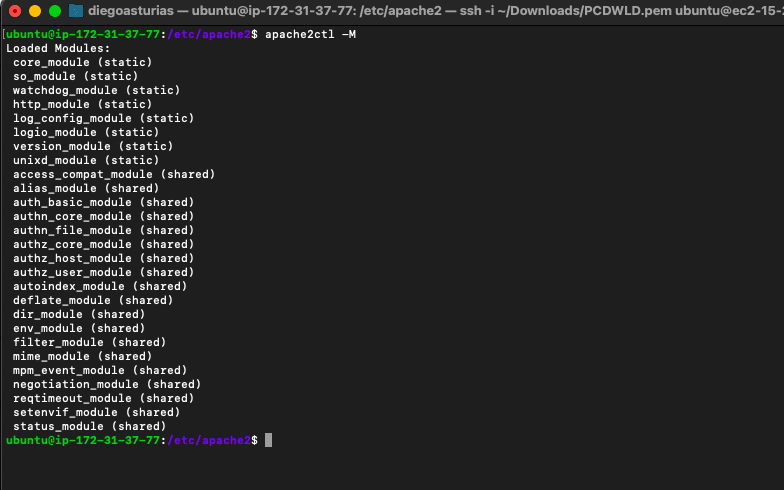 In addition, Debian and Ubuntu come with two features that help you enable or disable modules faster, in the case of Apache2. These two scripts modify the mods-enabled file in “/etc/apache2/mods-enabled”.

To disable an Apache module in other Linux distributions such as CentOS, Fedora, or Redhat (RHEL), you’ll need to modify Apache’s module configuration (.conf) file stored under the /etc/httpd/conf.d/ directory. First, back up the modulename.conf to modulename.bak, and restart the httpd service.

a. Disable some services, including CGI execution, symbolic links, and server-side includes

If you are not using CGI execution, symbolic links, and server-side includes services, you may want to disable them. However, if not configured properly, these services may put your web server at risk. To disable them from your server’s root directory and its sub-directories, open the Apache configuration file and find the “Options” directive. 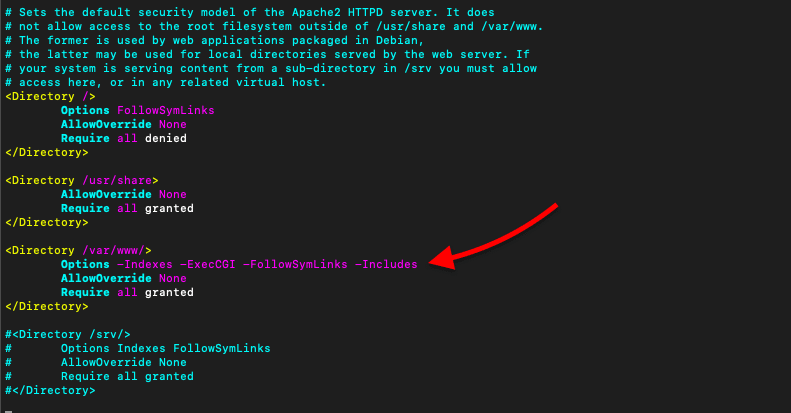 By default, for security reasons, the new Apache installations do not give access to run system commands; it only provides access to the DocumentRoot directory. So, the Apache process would typically run with an unprivileged user and group.

The default user and group names given to the Apache process will vary from every distribution. For example, in Debian and Ubuntu, Apache runs user and group: “www-data” by default, and in CentOS, Apache uses “apache.”

Although the security is already enforced, when different processes within the server, like Apache, MySQL, PHP, etc., use the same user/group name, a security issue in one process might lead to exploits in these other processes.
So, as a best security practice, create a brand new user.

a. Specify user and group

There are various methods to determine the user and group in Apache. The easiest way is to take a look at your Apache’s configuration file. Find the User and Group directives and set the name that you want the Apache process to run with.
Avoid running Apache as “Root,” as an exploited script can grant full access to the server. 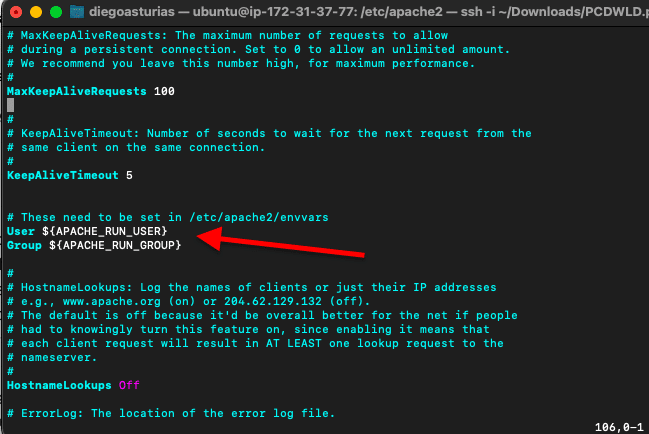 To see the user and group use the same method Apache does to set them; display the line of text of both variables like:

In addition, you can also use the “$apachectl -S” command to show general information on your Apache server, including User and Group.

b. Let’s create a new user and group

Use the following commands to create a new user and group.

Ensure the new user and group have the correct permission to the folder.

Modify the configuration file with the new User and Group, with: 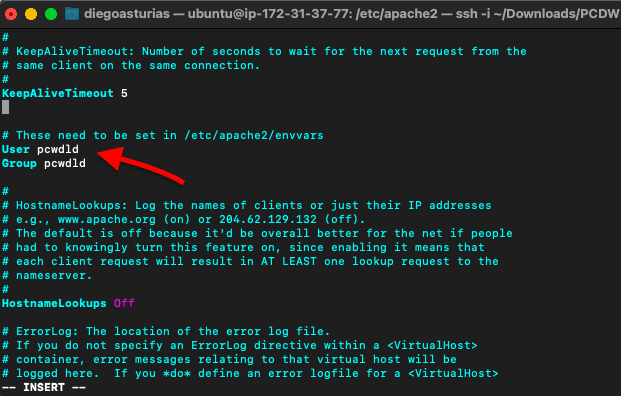 Verify if the Apache process is using the new user, using the command:

5. Enable the Security and Evasive Modules

There are two popular modules “mod_security” and “mod_evasive” that will help improve Apache's server security standpoint. These two modules are used to protect a web server against potential DDoS, brute-force, and SQL injection attacks.

Do you need both? Mod_security and Mod_evasive?

By itself, ModSecurity takes care of a wide range of security tasks, including protection from DDoS and Brute force, which is exactly what mod_evasive does. Still, mod_evasive is useful for dealing with DDoS’s floods of unnecessary requests that can bring a server down.

a. Install and configure the Security Module.

To install mod_security in Apache (for Ubuntu or Debian), use the following commands: 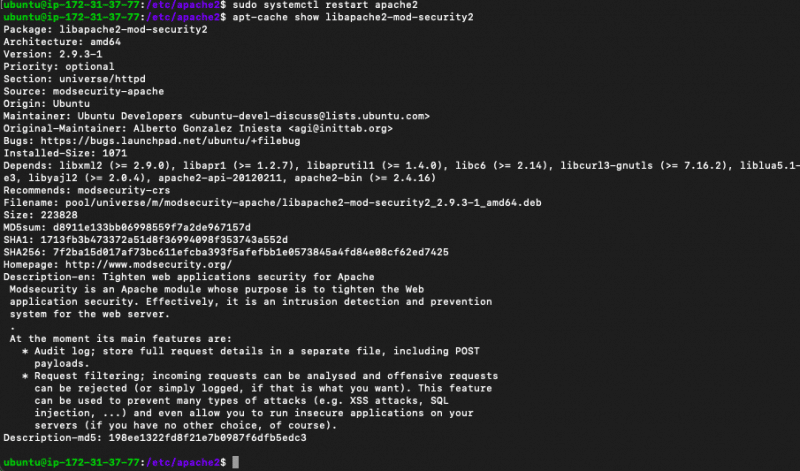 As you can see, from the above screenshot, by default, helpful in there are no security rules configured. Create a backup of the mod_security configuration file and then open it with the vi editor. 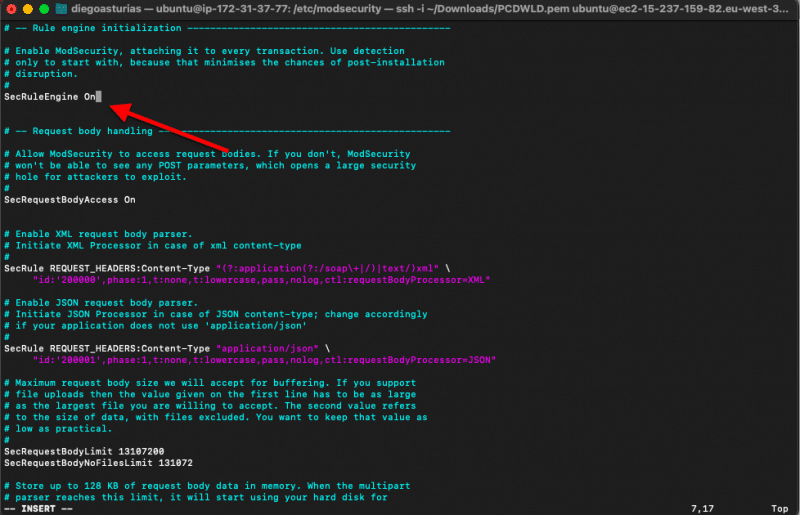 b. Enable and Add the Core Rule Set

Now, to include the OWASP’s core rule set into the security module, you’ll need to edit the ModSecurity’ configuration file. 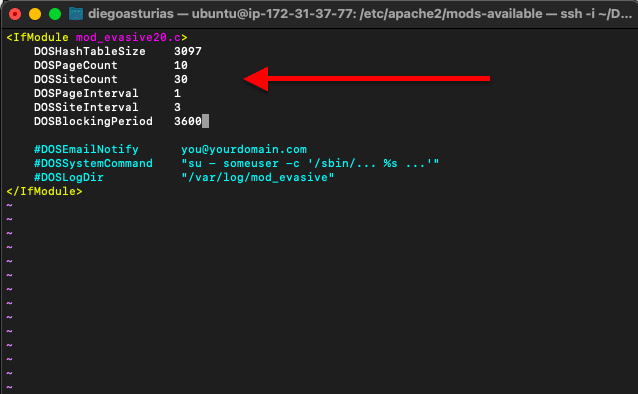 b. Installing and Configuring Mod_evasive.

To use Mod_evasive would require you to update iptables.

To install mod_evasive, use the following commands:

To get some help on the correct parameters for mod_evasive, refer to the Mod_evasive README file.

To make Apache start logging (independent from your OS logs), you’ll need to use the mod_log_config module (log_config_module). This module is static, which means that it is compiled by default into the configuration file. This module creates log files using three different directives:

These directives are specified under the Apache configuration file. To see them and edit, you’ll need to use the vi editor. 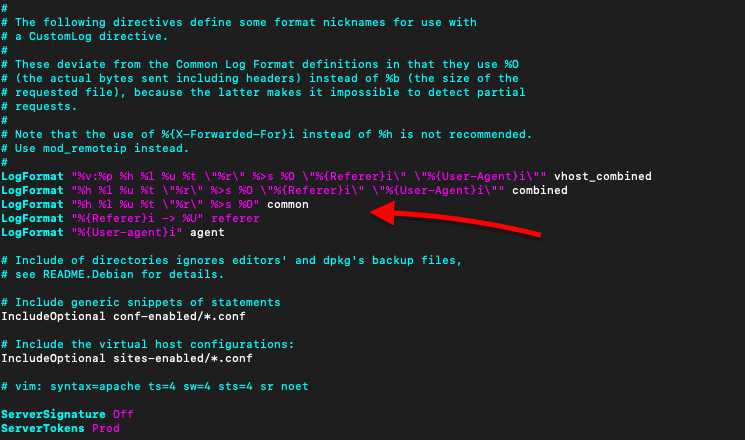 Use the following source to learn how to configure the Apache Logging Basics.

In addition, you can use third-party tools like SolarWinds Loggly to centralize, manage, and analyze all logs not only from the Apache server but from your entire environment.